We knew after we had camped at Kissimmee Prairie Preserve back in March of this year, that this park is one we’d want to came back to one day. So, several months ago we figured out a weekend in the fall and nearest a new moon to ensure skies good for star gazing. Being one of the darkest sky locations in the state of Florida, this park is a favorite of the astronomy lovers and they were out in force this weekend.

We made note of the best sites when we were here before and lucked out by getting a large site with a nice view. 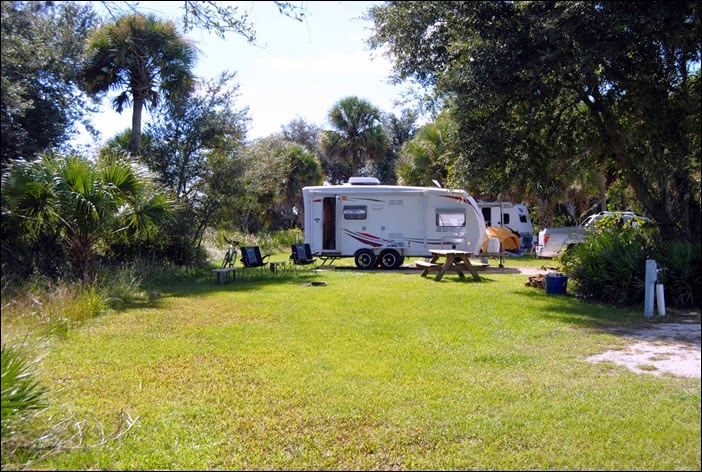 After we had made our reservations, my brother and sister-in-law decided to join us. Luckily the site right next to us opened up and they were able to grab it. They looked to the east over the prairie. 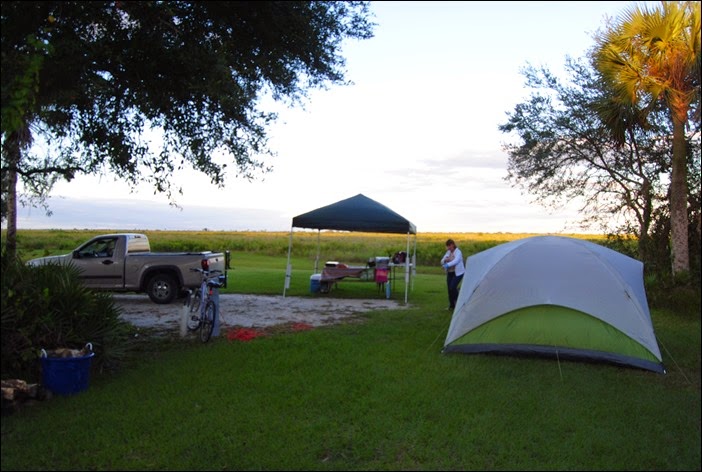 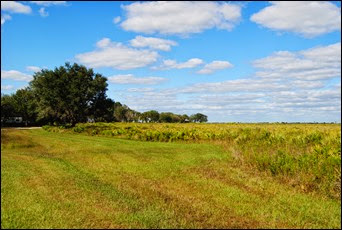 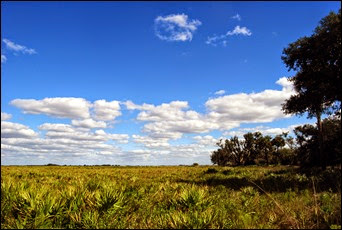 Kissimmee Prairie is currently around 54,000 acres in size with plans to increase this as they buy up more of the cattle farms to the north. This park is way out in the boonies and the land is flat with expansive views in most directions. 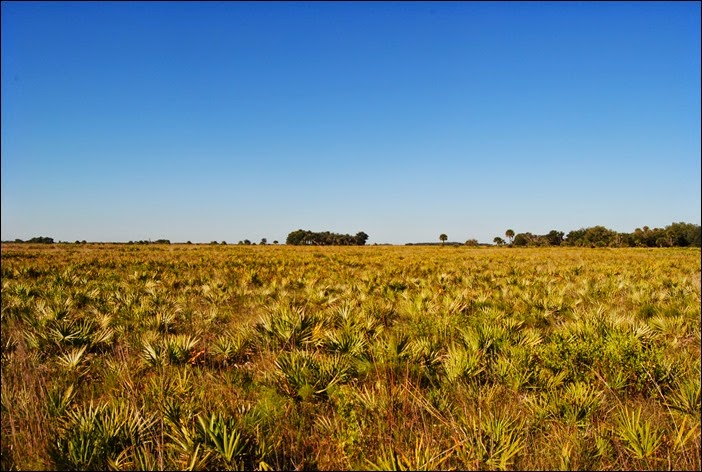 We had fantastic weather during the weekends camping trip. Highs during the day in the low 80’s and nice and cool at night in the upper 50’s. This weather was just right to do some hiking and we took one of the trails that started at the visitors center. The trail maps do warn you that since this is an area with a lot of wetlands, some of the trails may be blocked by water. And just like the hike we took back in the spring, we did hit several areas that required us to wade our way through.

Here’s Julie trying to find a dry way around, but she was only got so far before she accepted defeat and ended up taking off her hiking boots and sloshing her way ahead. 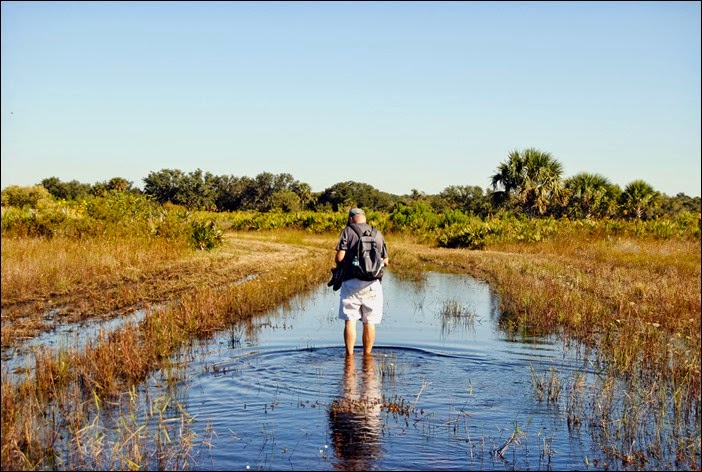 We eventually made our way around the loop trail and found a picnic table in the shade to relax and have a few snacks.

Here is the GPS track of the hike we took on Saturday morning.

On our two visits to this park, Julie has been on a quest to hike or bike to the Kissimmee River which forms the very west boundary of the park. She spoke with the ranger in the visitor center about biking the Military Trail that makes a relatively straight shot to the river. The ranger encouraged her to take this trail and that we’d surely enjoy it. My brother’s wife had broken her wrist a few weeks ago, so she couldn’t join us on this adventure. Julie, my brother and myself took our bikes on what we thought would be an easy ride through the prairie. It started out on a very nice limestone road, but quickly disintegrated into a road best traveled with a four wheel drive truck or one of the park’s swamp buggies. It was ether soft sand, thick grass or rutted muddy sections. We rode as much as we could, usually trailing Julie by about a quarter mile as we tried our best to get to that darned river. After about 5+ miles we took another look at the GPS and trail maps and realized that we still had several miles to go. As much as we didn’t want to do it, we declared defeat and retreated back to camp. We were a bunch of tired campers when we got back several hours after we started.

The views of the prairie were awesome as we rode along, just too bad that they didn’t have a better surface for biking. 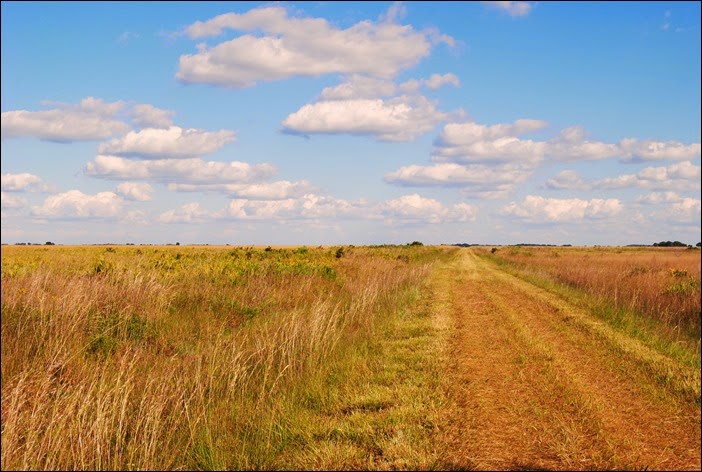 In some of the wetter areas of the prairie there were many fall wild flowers in bloom. 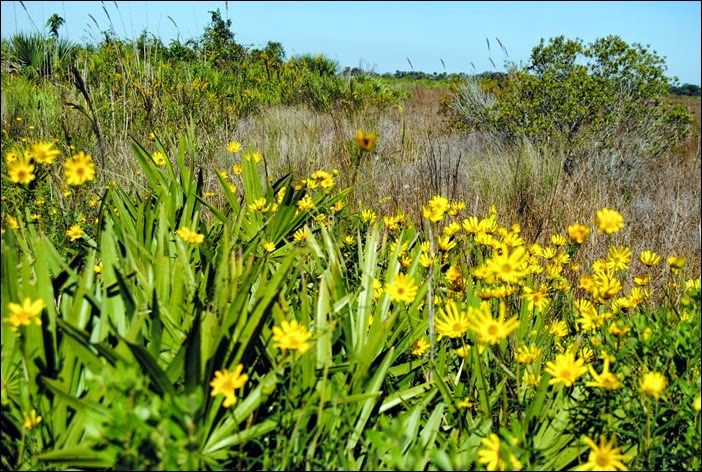 Here’s the GPS track of our torturous bike ride

We did have some clouds and breeze during the days, which kept things cools and very pleasant. Luckily for the astronomy groups who were camped here, it did clear in the evening which made for some great star gazing.

This shot below shows part of the start filled sky looking north. That streak above the tree line in the picture is actually the International Space Station as it sped its’ way across the sky. We each also saw several shooting stars during the night, although Julie struggled (and whined) at times trying to find one!! 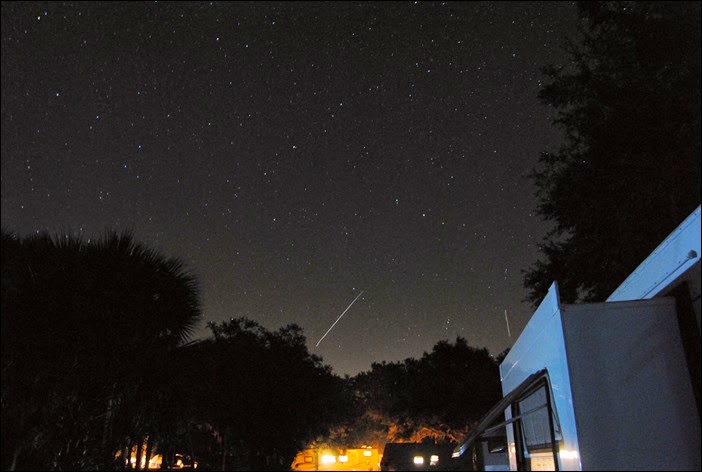 With no visible moon and the clear skies, the milky way was easy to see as it arched its’ way across the heavens from the south-east horizon toward the north-west. 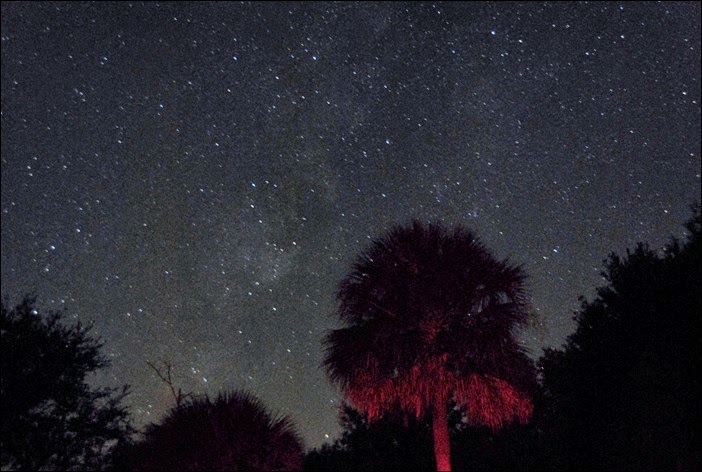 We were also able to find some of the constellations like the big dipper pointing to the north star and a few planets, such as Mars and Jupiter made an appearance.

With this being one of the darkest areas of Florida, it’s still not totally free from man made light. This picture below shows some of the light pollution coming from the cities on the east coast of the state. 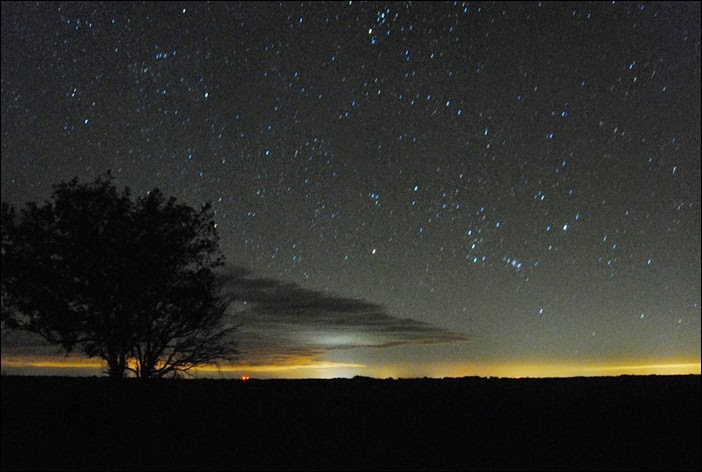 This state park has a separate camping area for the astronomy buffs who use this as a location for their (expensive!!!) hobby. Here’s a picture of their sites just beyond the visitors center where’s there is room for their rv’s and space for them to set up their large telescopes (the covered objects to the right). It’s quiet during the day, with most them probably sleeping, but comes to life at night. Many of them stay awake all night photographing far off solar systems, star cluster and other hard to comprehend stellar objects. 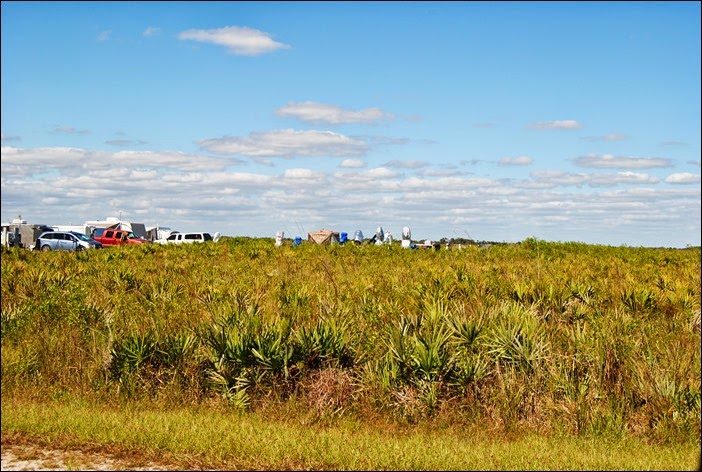 On Sunday, before we had to pack up and head back home, we all made our way to an area with some ponds to watch the birds take flight as the sun rises. It’s also an area with a good collection of gators. It was a cool morning, so they were slow to get going. But as the sun got a little higher and the air warmed, you could start to hear them. At first is sounded like someone snoring out in the weeds. As we were walking back to our bikes, one large male gator really started to bellow and thrash about and just about scared the @#!% out of us. After we got a safe distance away we watched him for awhile and he would bellow and then get quiet. Then from another area another gator would do the same. It was actually very interesting to watch this behavior which none of us had witnessed before. 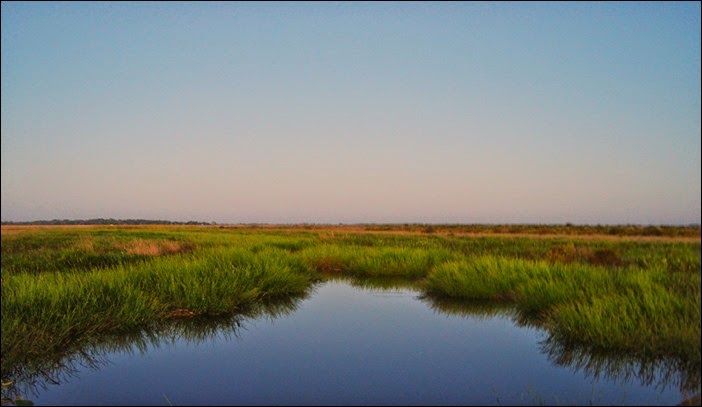 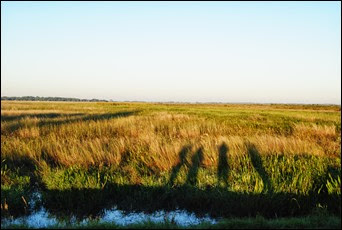 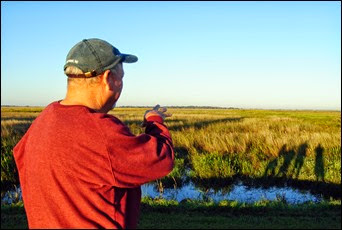 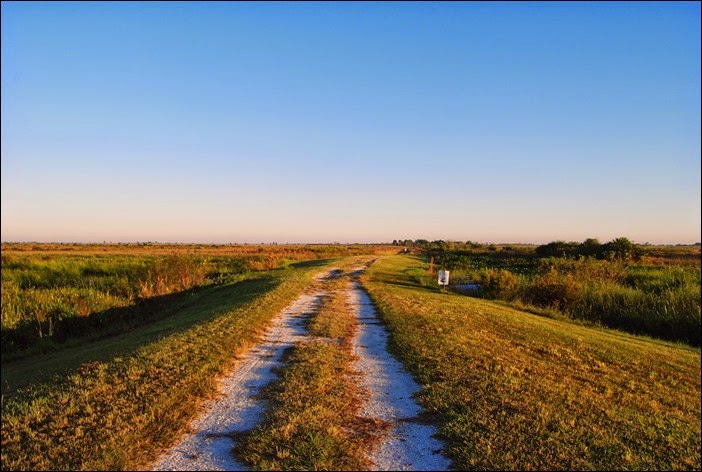 Kissimmee Prairie is a noted location on the Florida Birding Trail. There is constant bird activity around the area and much can be seen right from our campsite.

Here’s a hawk that was perched high in an oak tree by our site and looking around for its’ breakfast. 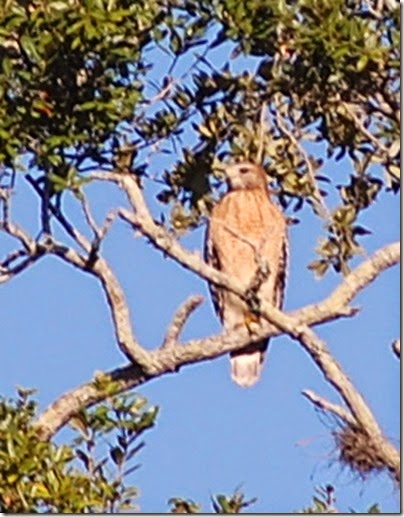 This Barred Owl cruised through our campsite and landed in a tree not too far from us. It we hadn’t seen it fly by, we would never have seen it as it blends in so well with the tree it landed on. 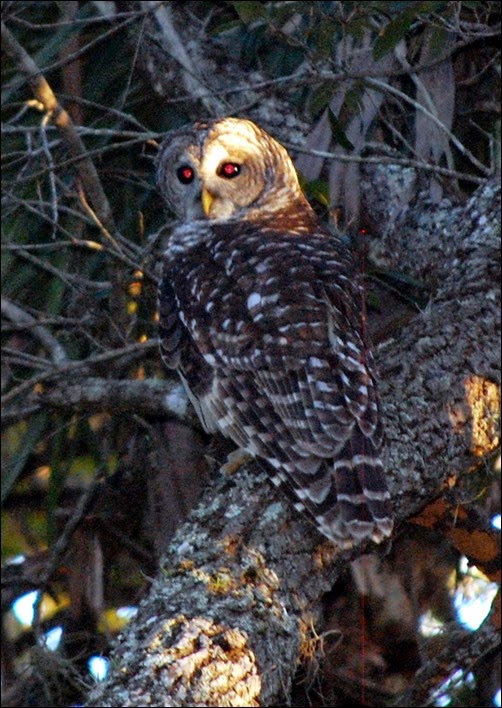 And my last bird picture is of a Crested Caracara which nest in the park and surrounding areas. This guy (or gal) was one of three that landed in a ditch nearby and was looking for something tasty  to eat. 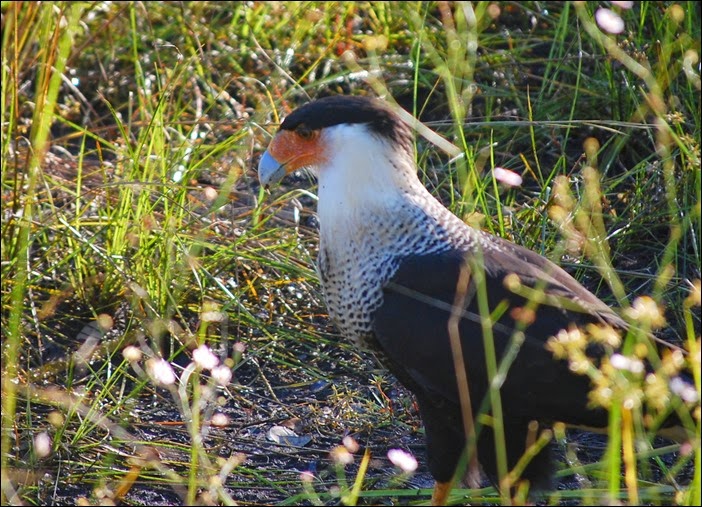 After our morning walk we spent a short time relaxing before packing up and heading back to reality. We had an awesome weekend of camping and truly enjoyed spending it with Jim and Jo. We hope to plan many more camping trips with them in the future. We do have one more on the books as we will be doing another trip with them in early December for a weekend at Fort de Soto in St. Pete. 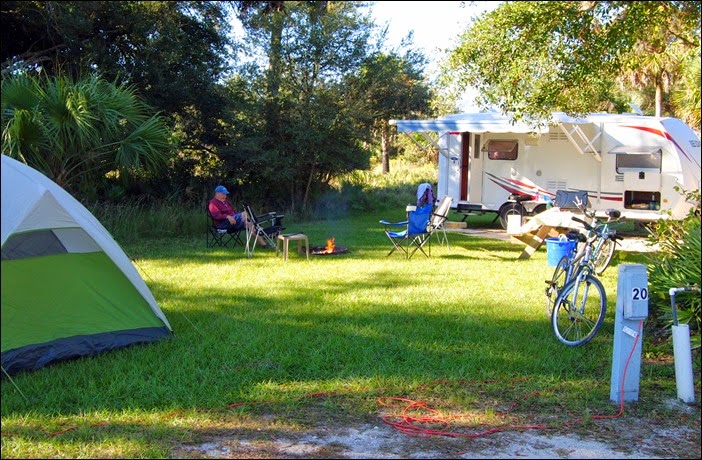 Here’s a link to a short YouTube video from this camping trip.