The weather was perfect for some outside activity, so Julie and I decided to take an hour drive north on I-75 to the town of White Springs where that are two Florida State Parks. The Stephen Foster state park has camping so we wanted to take a look as we are always interested in finding new locations for short weekend camping adventures.

As the name implies Stephen Foster Folk Culture Center State Park is dedicated to the American composer Stephen Foster who lived from 1826 – 1864. He wrote more than 200 songs and many remained popular long after his death. The building below looks like and old southern mansion and contains a museum covering the life and songs of Mr. Foster. This museum included many old pianos from his time as wells a a number of diorama's showing scenes from many of the more popular songs. 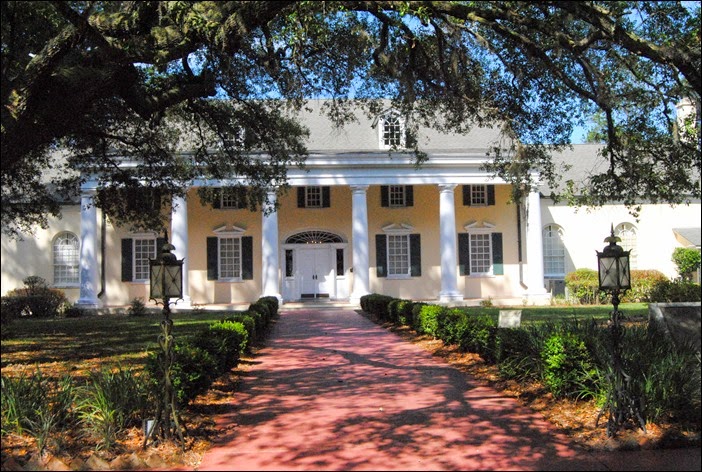 The Carillon Tower tolls through out the day and on the top of each hour plays many of Foster’s tunes. The base of the tower also houses a small museum with many historical pieces. 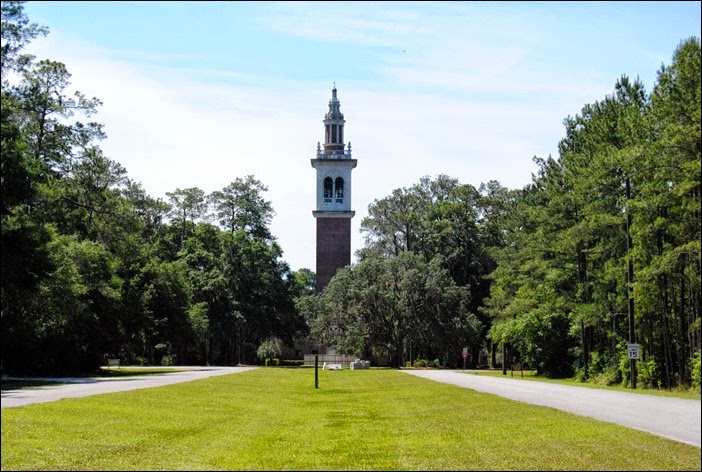 A section of the Florida Trail runs through the park. We attempted to hike a short part of it as it follows the Suwannee River. Unfortunately, the water level of the river is high at this time and we had to turn around. Below is the track of a short hikes we took around the park and the camping area,  We did find a good number of nice campsites here, so we marked them down and plan on returning sometime to do some camping.

Just outside of the State Park entrance is the remains of a hotel and spa that was built around a larger spring on the river. This area was very popular back in the 1800’s as it was believed that soaking in the spring was good for your health. The hotel offered all kinds of “packages” that guaranteed to solve whatever ailed you. Here is all the remains of the old hotel and spa. The water doesn’t look so enticing now as it flooded by the tannic water of the Suwannee river. 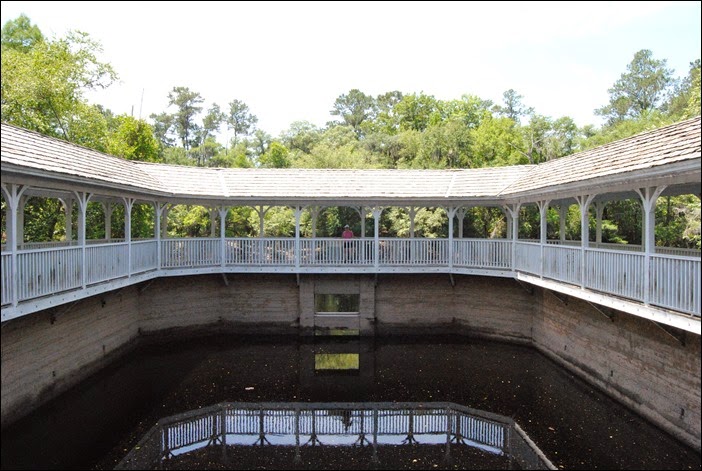 As you can see below, downtown White Springs is a bustling area!! 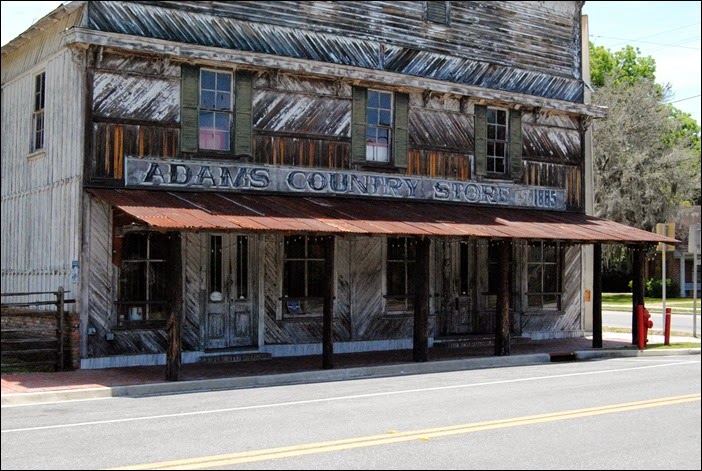 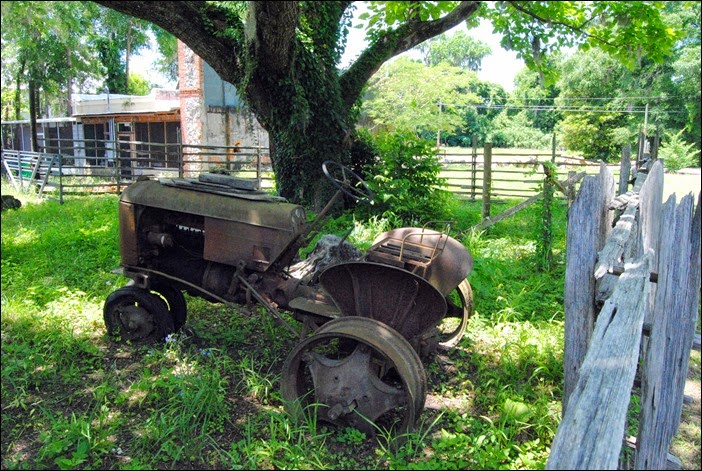 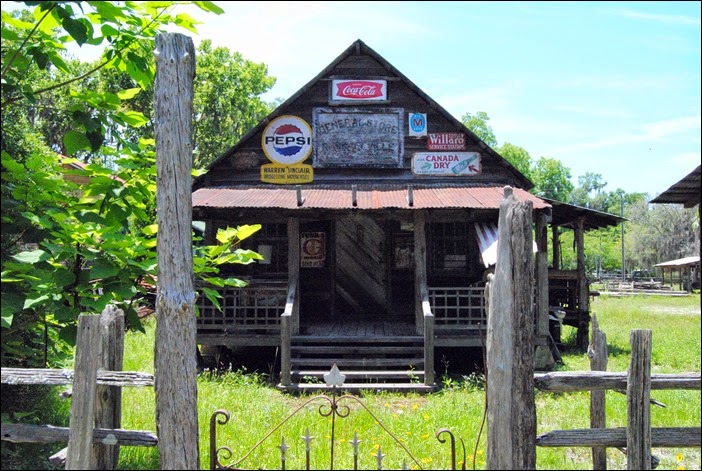 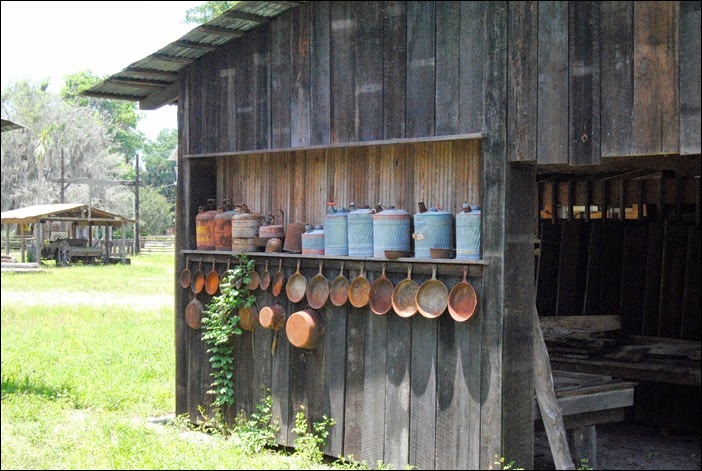 About five miles north of White Springs is the other park we wanted to check out today. This was Big Shoals State park and is also on the Suwannee River. This is the location of the only white water in Florida. There’s two sections of the river, Big Shoals and Little Shoals, where if the water is just right you will be able to canoe or kayak some class III rapids. The parks kayak launch area was closed today because of the high water. We saw a few sections of rapids, but for the most part the water was too high and totally covered the rocks and shoals. 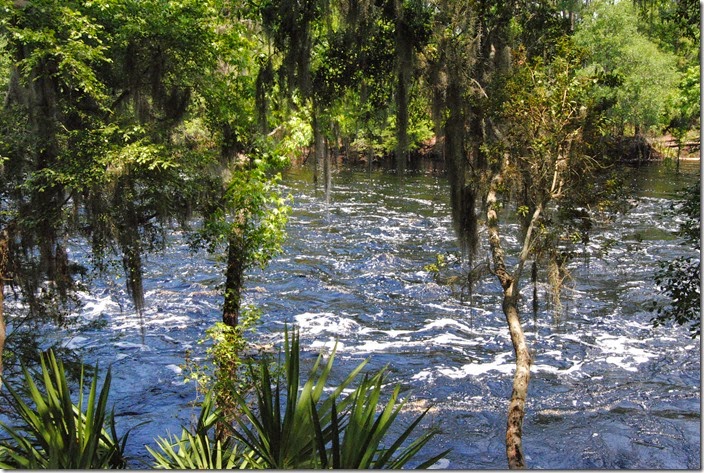 We did do a hike along the river which had some nice overlooks to check out the shoals. 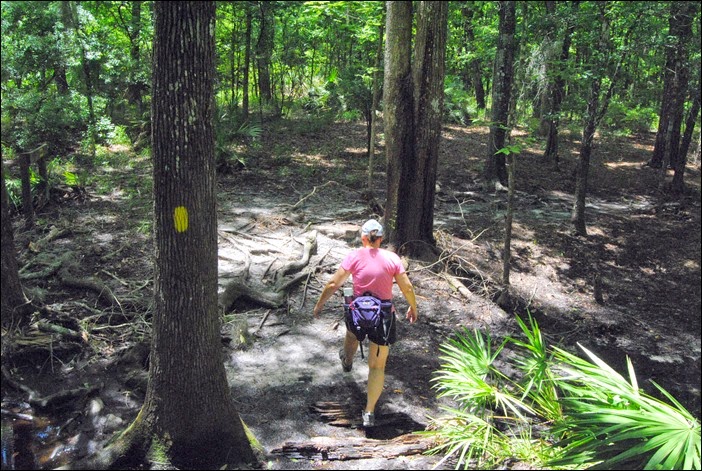 Here is the GPS track or our hike.


This gopher tortoise was blocking the road as we were trying to leave the park. It was a stare down, and we finally had to relocate him to a safer location on the side of the road, 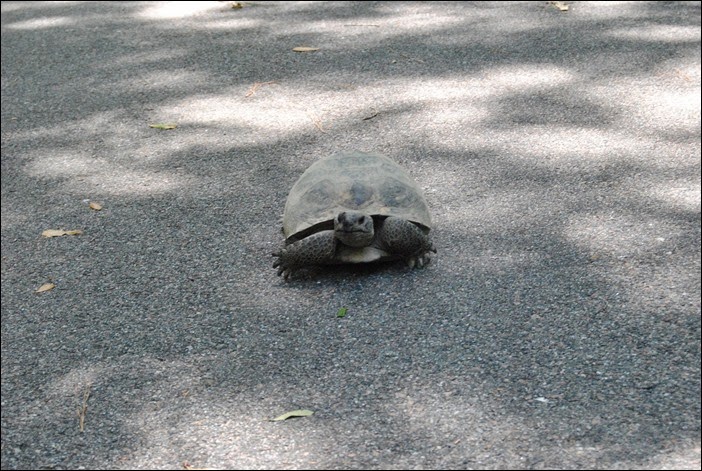 Back in July of last year we made a reservation for a campsite at Anastasia State Park just south of St. Augustine for a four day stay. Sometime we actually do plan ahead which we are finding is required to secure a spot at any of the popular campgrounds in the state.

A year ago we attended the Players Championship golf tournament in Ponte Vedra, which is a 30 minute ride north on A1A. We enjoyed it so much that we decided to do it again this year. Even though we are camping in the area for four days, we’ve decided to only attend on Sunday which is the last day of the tournament.

This year Julie’s sister Lucy and her husband Gery decided to join us for the weekend. They are from Iowa and are trying to thaw out from a long hard winter up in those parts. So, our stay at Anastasia being right on the beach was a perfect location. Gery is also a big golf fan, so he was more than ready to attend the Players Championship.

Gery and Lucy on the boardwalk leading to the beach at Anastasia. 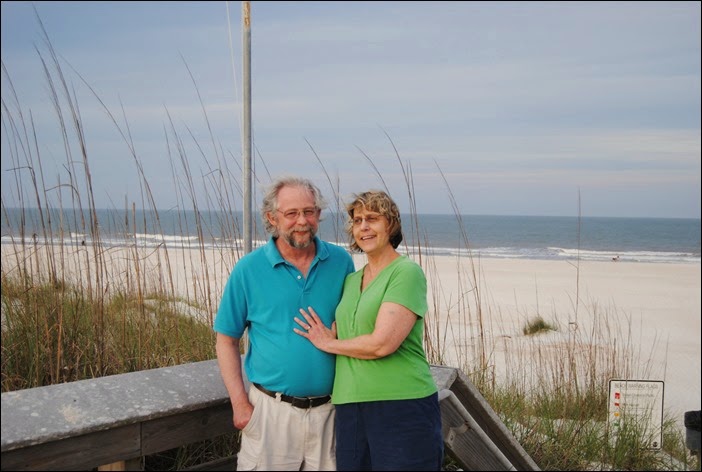 A few evenings we did a little walking on the beach. It was a little overcast and breezy, but still nice. 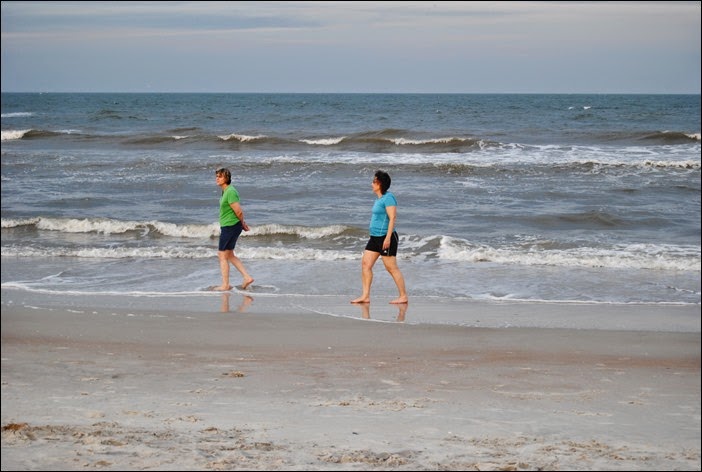 On Saturday we did some of the touristy things in downtime St. Augustine. Our first stop was the old fort Castillo De San Marcos which is right on the water and close the the Bridge Of Lions. This is a national monument managed by the National park Service. If you are into history, then this is a good stop to make. Gery, who enjoys history, was always way behind Julie, Lucy and myself. He was reading every display throughout the fort as we walked around both levels. The three of us didn’t have the same attention span, we kind of skimmed over things! I think Gery finally gave up and bypassed several of the areas of the fort.

Several time per day they have a reenactment of a firing of the cannon. The fort has a large selection of old cannons and I believe they said they used the 6 pound cannon for the demonstration. I’m not sure where the name “6 pound” comes from, maybe the size of the cannon ball, but the cannon itself must weigh in the thousand of pounds.  The soldiers start their march from down in the grassy common area and then climb the stairs to the second level. They go through the lengthy routine of loading, firing and cleaning the cannon. For obvious reasons they don’t really fire a cannon ball, but instead use a gun powder charge mixed with bread crumbs. The  volunteer ranger says many of the birds get used to the demonstration and then swoop in as soon as the cannon goes off to feed on the crumbs. That didn’t happen the time we watched, the birds must we getting lazy. 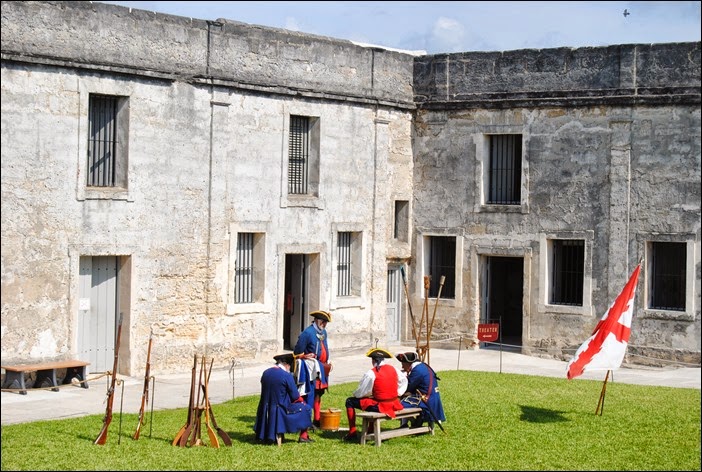 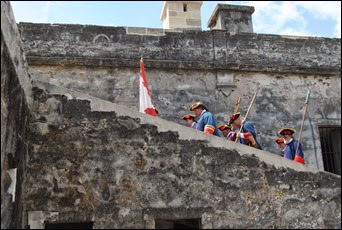 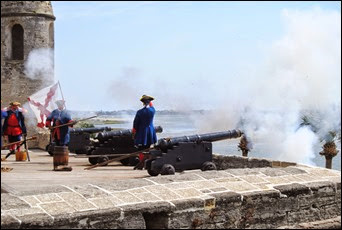 Here’s a picture of Julie and her sister Lucy taken from the fort with the historic downtime St. Augustine in the background. 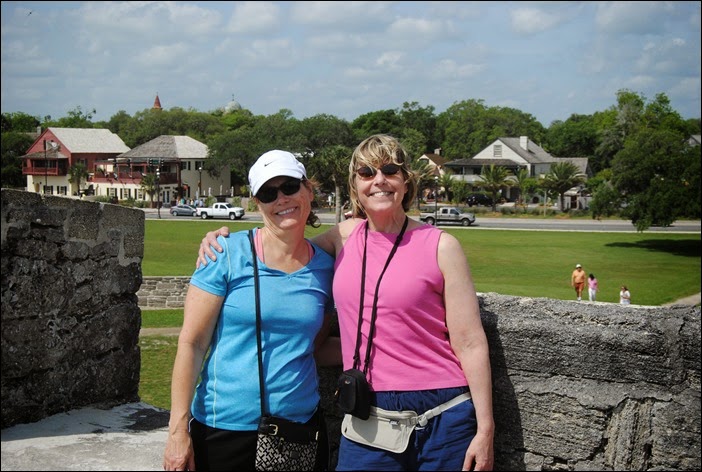 On our way into town we noticed several large old sailing ships at the marina on the south side of the Bridge of Lions. After our tour of the fort, we walked along the water front and headed in that direction. We found that they were offering tours of the boats for a reasonable price (actually free for us since Gery and Lucy paid!!), so we decided to view both ships. These two boats are replicas built by the Spain government and sail the world crewed by mostly young volunteers. The smaller ship was a replica of the Nao Victoria which was the first boat to sail around the world. This ship has also done an around the world voyage from 2004 – 2006. The larger of the two boats was the El Galeon which is a replica of a ship that traveled the coasts of Florida between the 16 and 18 century. 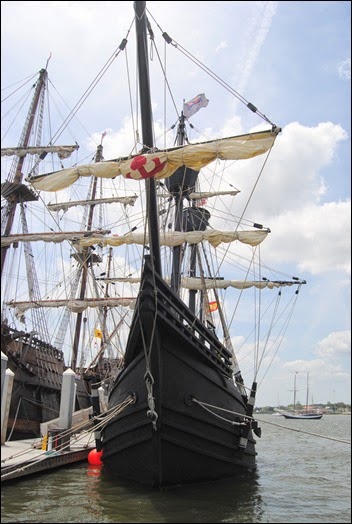 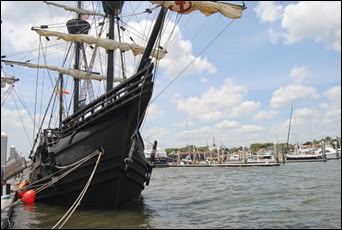 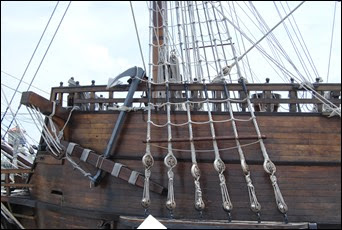 And of course, whenever Lucy comes to Florida she must have some seafood and in this case a few “small” orders of oysters. 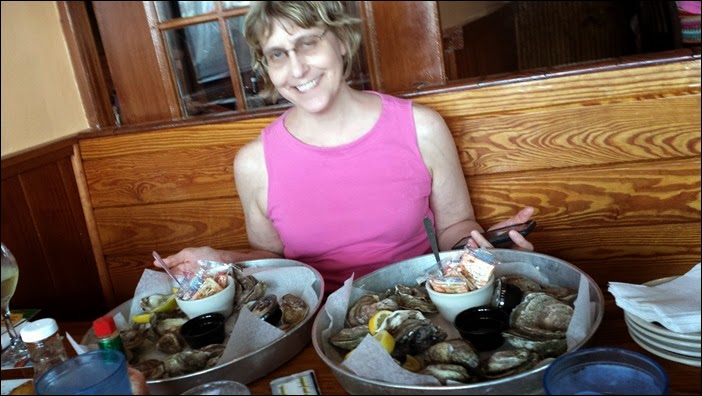 One Sunday was the TPC golf tournament and main reason for our trip to the area. We arrived somewhat early and planned on spending the day until the very end. We did spend a good amount of time walking the front nine and trying to view a few of the popular twosomes that were playing the course. All four of us had also bought tickets to the Blue Room which was an area with lots of seating areas, both outdoors and an air conditioned inside area. It also included food from several local restaurants as well as all your care to drink beer and wine. Later in the day it was beginning to get a little rowdy as the crowd was partaking in quit a few of the included drinks, At times it seems like to many the TPC tournament is just a good reason to party and just happens to have some golf going on. My guess is many spent the entire day in the Blue Room and never ventured out onto the course.  The Blue Room was fun and made for some really good people watching!!

Later in the day Julie and I walked most of the back nine which included many golf holes we had never seen. On two occasions (consecutive twosomes) drove their golf balls way outside the fairway and almost hit Julie. We were beginning to think she was a ball magnet.

We had planned on staying to the very end and found some good seats in the bleachers overlooking the 16 and famous 17th hole. Usually near the end of the tournament this gets to be a wild location as all the fans congregate around the finish holes and it can get a little loud. Unfortunately, storms were building in the west as you can see with the dark skies in the picture below. After several strikes of lightening off in the distance, they finally blew the horn and halted the tournament. We decided to hit the road instead of sticking around for the weather to clear. They did restart the tournament about an hour later and were able to  finish the tournament. Martin Kaymer, a 29 year old golfer from Germany, was the winner and took home a nice $1,800,000 check. Not a bad payday for four days of playing golf! 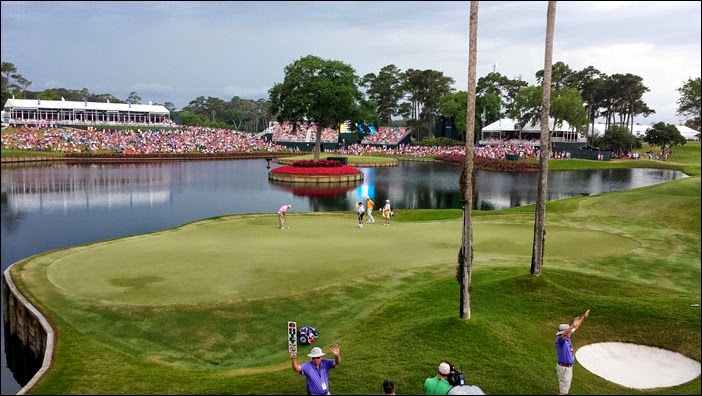