Julie and I like to try and get out camping at least once a month during the Florida camping season (fall, winter and spring). Our last trip was to Cedar Key back in March which is about two months ago. So, we’re not doing the best job of sticking to our plan. Part of the reason is you really have to make reservations a long time in advance to get into the Florida State parks during the cooler months, and planning ahead is difficult for us at times!

Awhile back when looking for open campsites we noticed that there was one opening at Anastasia State Park for the second weekend in May. Also, being a golf fan I realized that the was the exact same weekend at the PGA Players Championship on Ponte Vedra, Fl. So, we booked the site and made plans to attend the golf tournament on Sunday. This would be Julie’s first pro golf tournament and I had not been to one in many years. So, this would be something different and interesting to do.

I won’t go into many details of the tournament (probably not many golf fans out there), but we had a great time and spent the entire day walking the course, checking out the many players and having a few beers at the many different locations they have spread around the facilities. It was sunny and hot in the afternoon, but we stayed until the very end. Tiger and Sergio were tied at 13 under par and it looked like there could be a playoff between these two players (who really don’t like each other). We were about 20 yards behind Sergio when he put two balls in the water on #17 which ended any chances he had of defeating Tiger. We then walked to an overlook behind the 18th tee box and watched Sergio put another ball in the water on that hole. A total meltdown by Sergio and Tiger wins another tournament (yawn..!) We didn’t venture down to the 18th green to see Tiger accept the trophy as it was packed with spectators. We decided to call it a day and head on back to the campsite.

A picture from my phone showing Tiger after his tee shot on number 9. 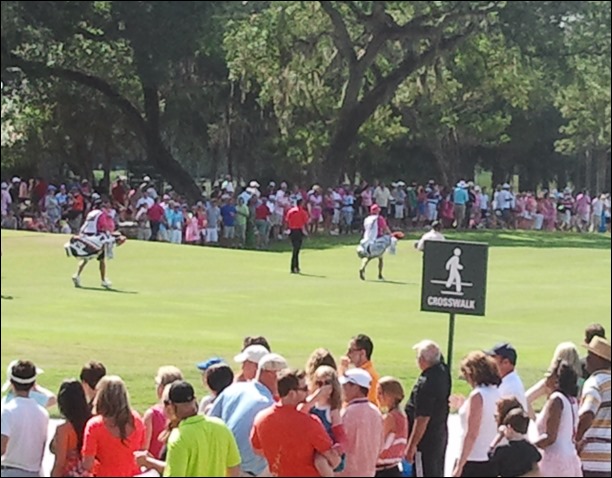 We’ve stayed at Anastasia State park back in May 2012 and December 2012. This is a great campground near the ocean with miles of unspoiled beach. Our site this time around was number 43 which was pretty decent in size and well hidden from the adjacent sites, especially on our canopy/door side of the camper. 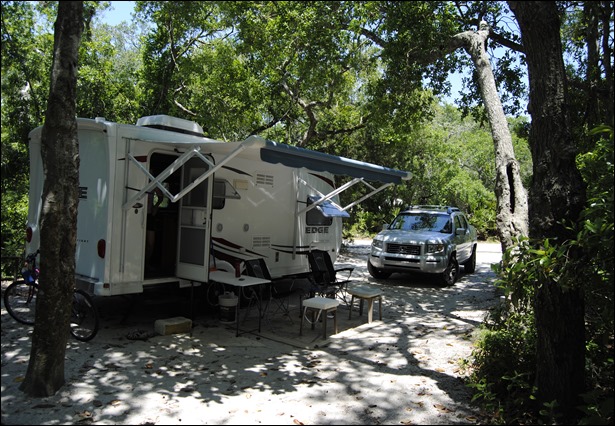 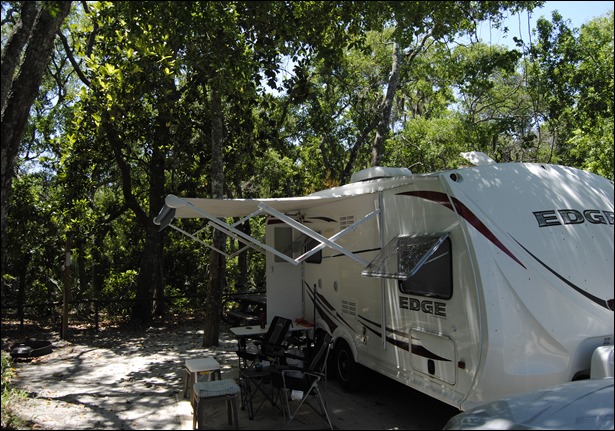 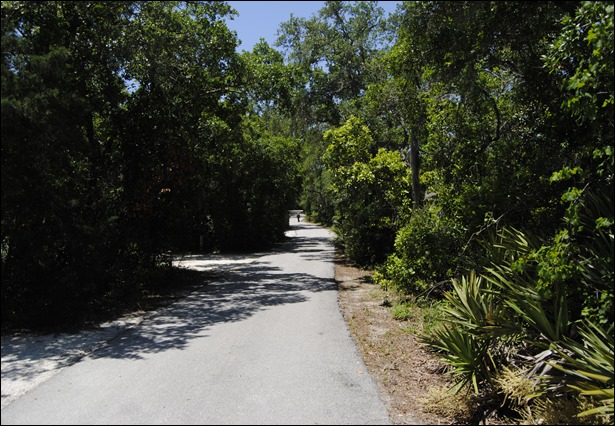 On Monday we did a little bike riding around the campground and surrounding area as well as a few short hikes, but I’m not sure hikes would be accurate as these were all fairly short walks through the woods.

On the road leading into the park, you can find a lot of gopher tortoise dens. If it’s sunny and warm, you can see them hanging around outside their home. Here’s one that didn’t bolt back into its’ den when I approached to take its’ picture. 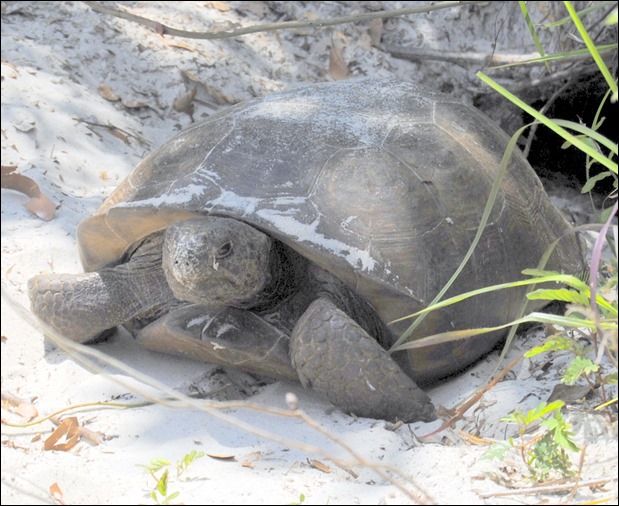 The first trail that we walked was the Old Spanish Quarries which is a trail near the entrance of this state park. This hike is short in length, especially when it is flooded by all the rain this area has had in the previous few weeks. 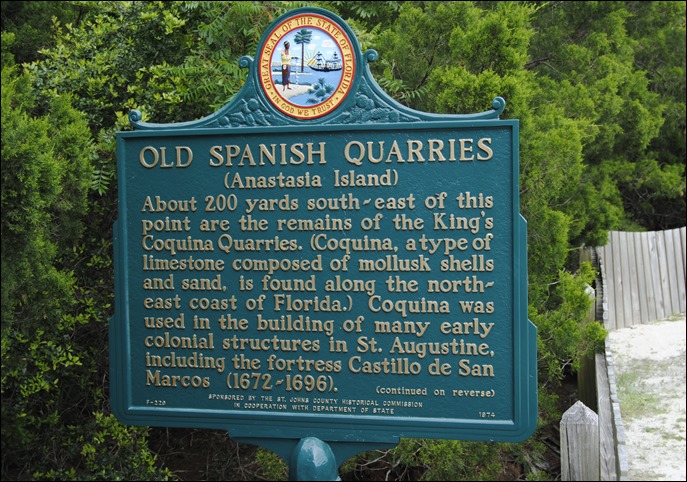 The end of the line. The quarries where they mined coquina to build many of the building in St. Augustine, but filled with water. 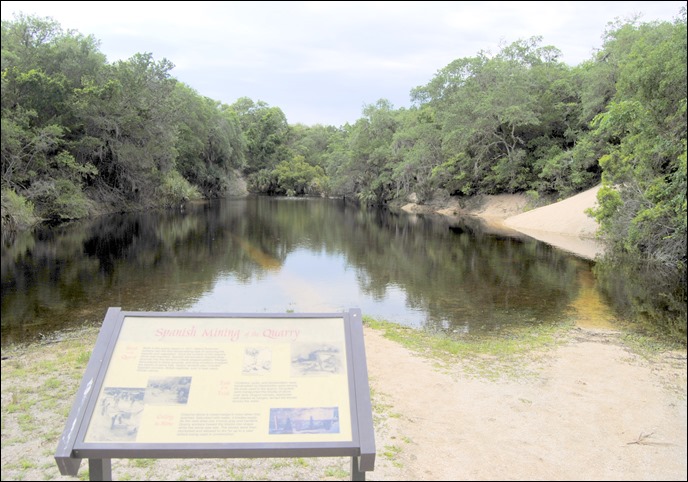 Here is our track of this hike.

Another stop that we made on our bike ride was at St. Johns Nature Arboretum which is a park right next to the St. Augustine Amphitheater. This is an old “tired” park which looks a little neglected and has a confusing set of trails. But it was a walk in the woods, so it was nice. There is a set of exercise equipment on the trail surrounding the pond, but we passed. 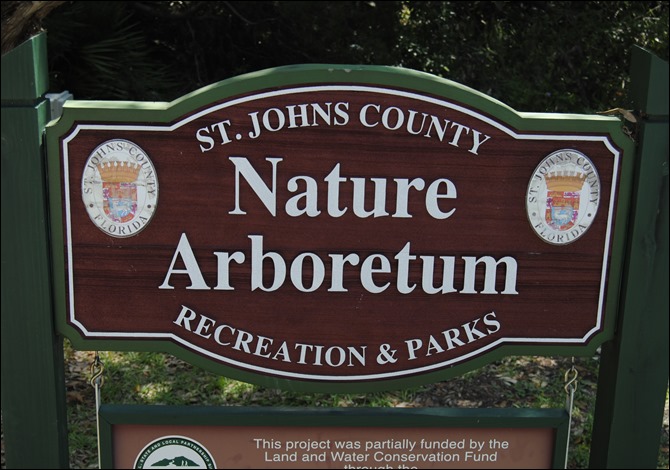 There was a loop around a small pond with many turtles in residence, but the dock at was under water from all the recent rains. 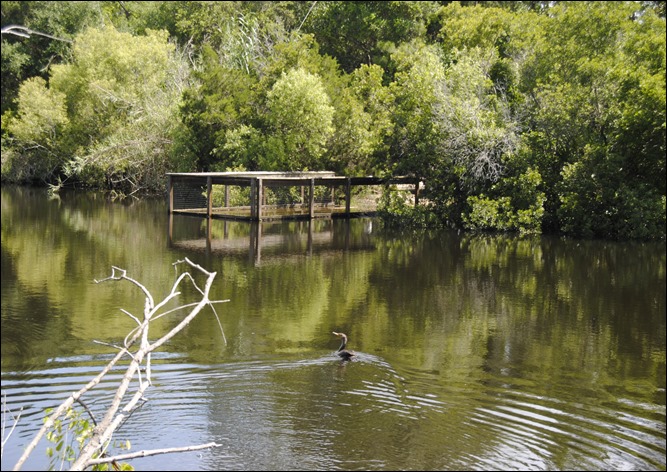 Here’s our GPS track of this hike.

The last hike that we did for the day was the Ancient Dunes Loop Trail which is within the camping area of St. Augustine SP. 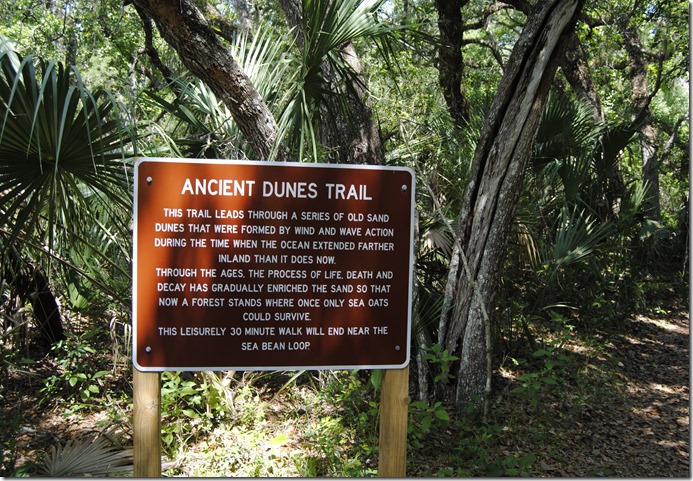 Here’s a section of the trail that climbs up and over one of the ancient dunes. 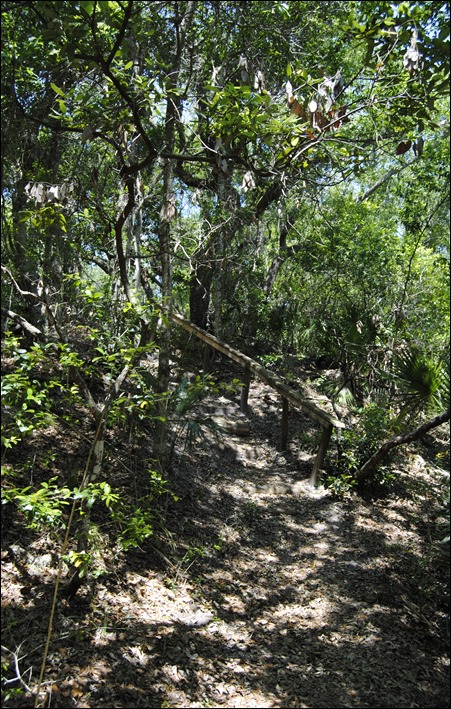 This trail was a short .6 mile loop that climbed many of the old sand dunes that are now covered with forest. There’s also information plaques along the trail that describe many of the trees and bushes seen in this area.

Here’s the GPS track of this hike.


One last walk on the beach before we had to return home the next day. This is a picnic area next to the beach parking lot. The wind swept trees are interesting. 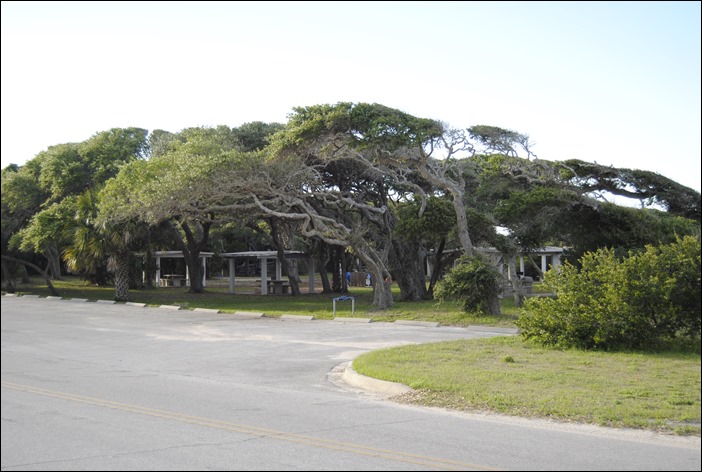 This is one of the boardwalks that lead from the parking lot, over the sand dunes and onto the beach. 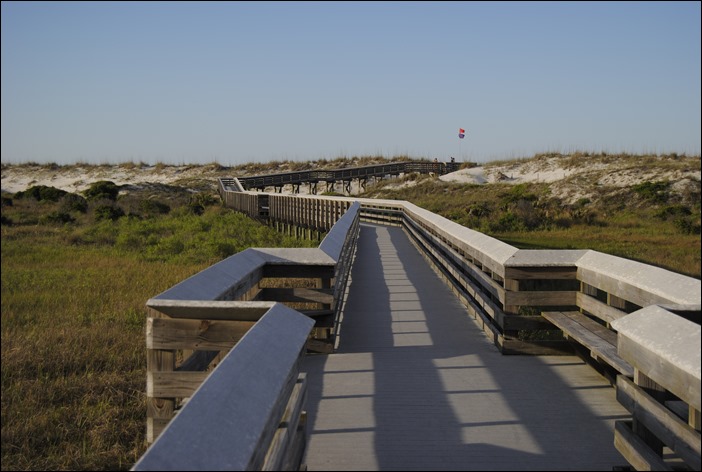 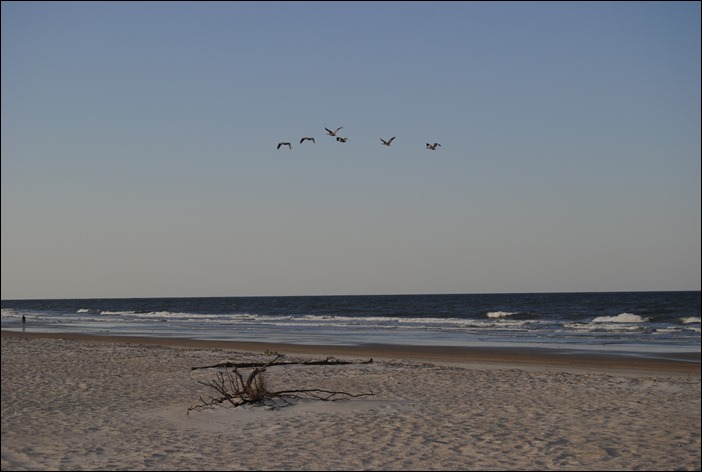 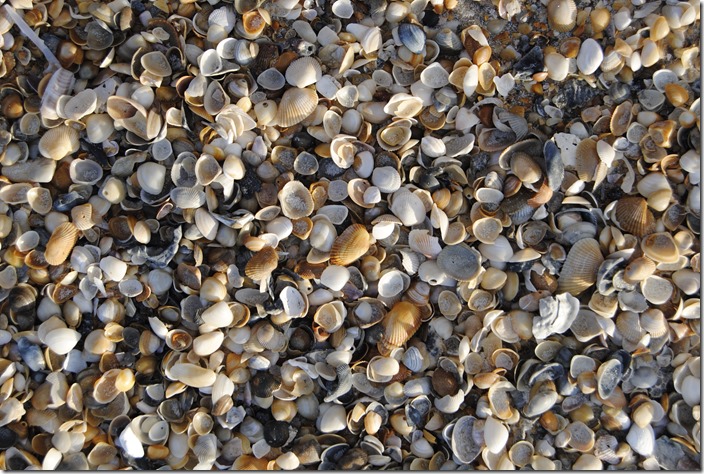 Julie pointing out some dolphins swimming in the surf. 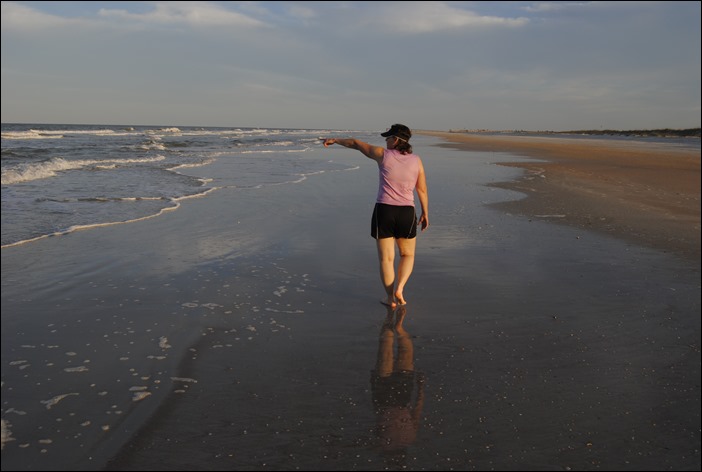 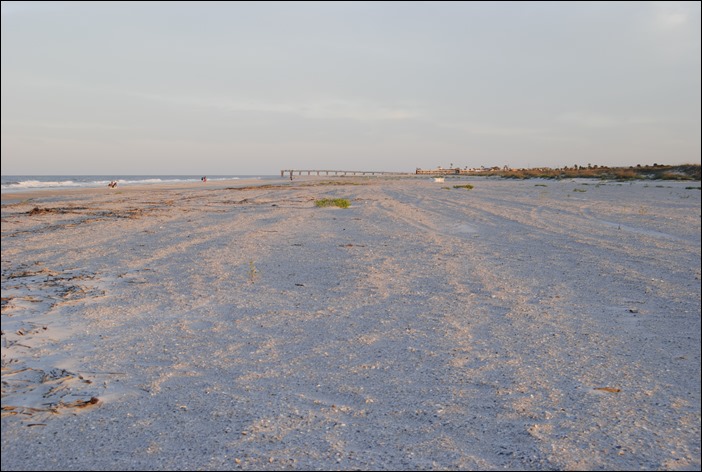 The sun setting in the west over the sand dunes. 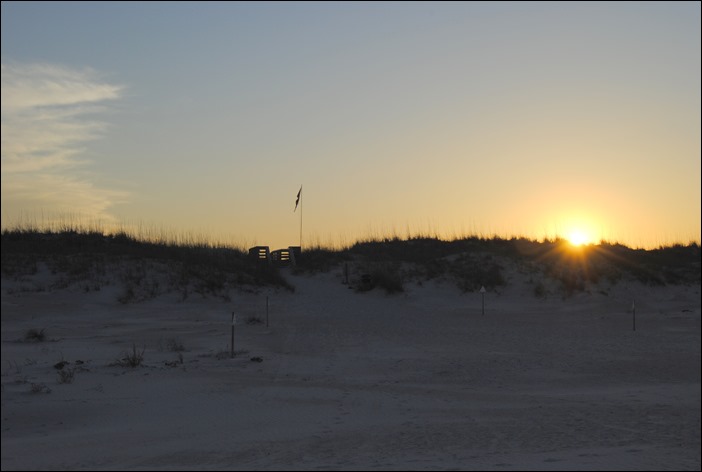 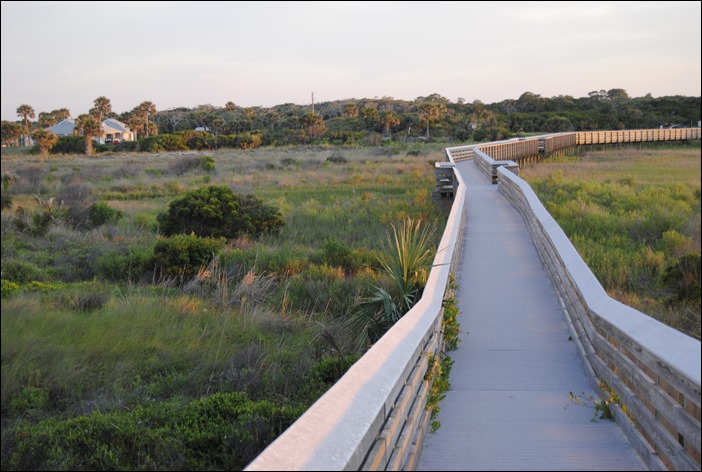