A day paddling the Ichetucknee River

We’ve not had the best weather lately here in Florida. On Saturday it rained, the wind blew and it was pretty chilly. Not the best weather to do any outside activities. But on Sunday it was supposed to clear and the temps were projected to rise some. So, we decided to take out the kayaks for the first time in many months.

Last year we kayaked the Ichetucknee River for the first time. We found this to be a beautiful river to paddle, one of the best in Florida that we’ve been on. There’s no development at all along the section of the river we were on, so that make it very peaceful.

There is a north entrance and a south entrance to the Ichetucknee River state park and you can put in at either location. We like to start at the south location, paddle the 3+ miles upstream and then do a leisurely float/paddle back to our starting location. The flow of the river is somewhat strong, but nothing to strenuous for the paddle upstream.

This is the launching point on the north entrance. It’s just below one of the many springs that feed this river. With all the springs along the way, the water in this river is very clear. 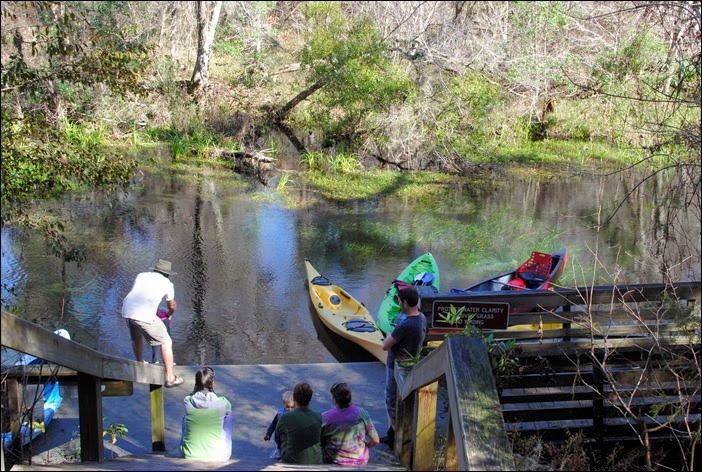 The paddling is pretty easy and I think this was the only tree blocking the way, but no problem getting under this one as we made our way back down river. 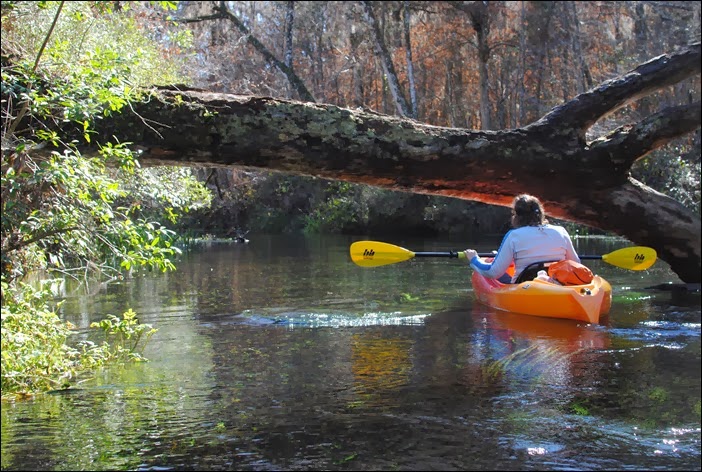 And what would a day on the water in Florida be without a few sunning turtles. Most of them were pretty brave and didn’t dive into the water as we passed. I think they are very used to seeing humans. During the summer this river is a major tubing run and kayaking / canoeing is not allowed (and you’d probably not want to go even if you could). Late fall, winter and early spring is the time to paddle this river. 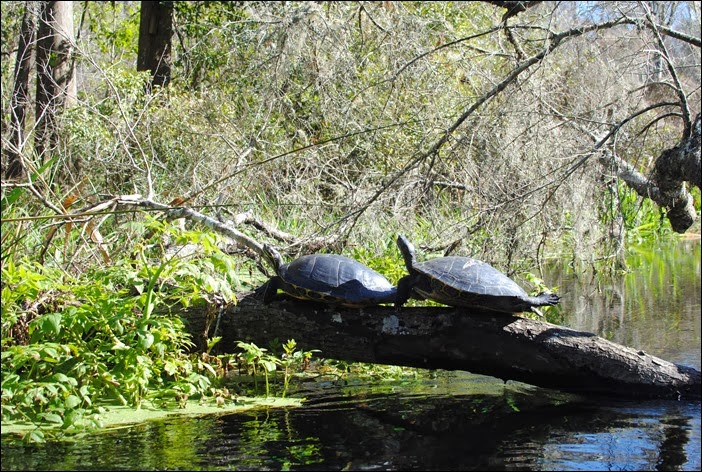 We saw a good variety of birds along the way and even saw a few river otters. I wish I could have gotten a picture of them, but they are much to quick. 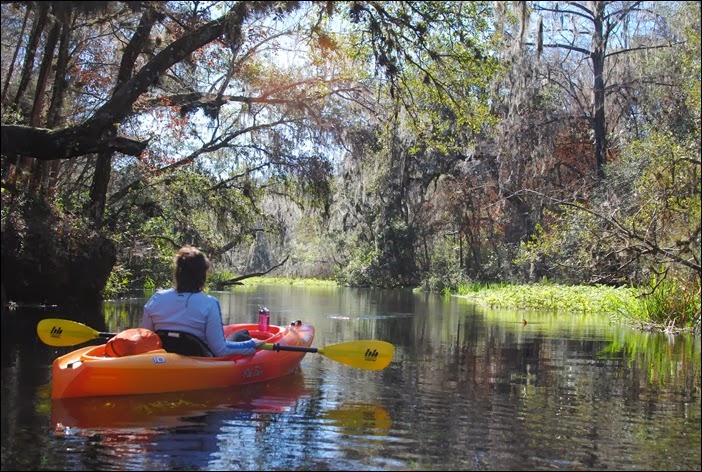 Although hard to see, this is the Devil’s Eye spring which you can kayak over and take in. A few of the springs are fenced off to prohibit people from entering as a way to preserve them. 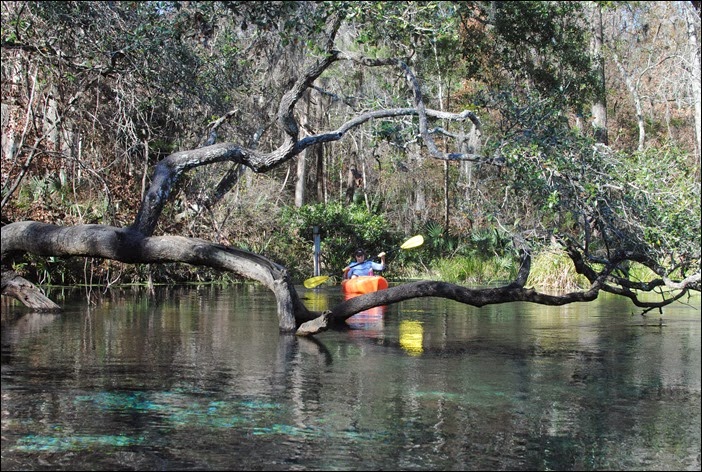 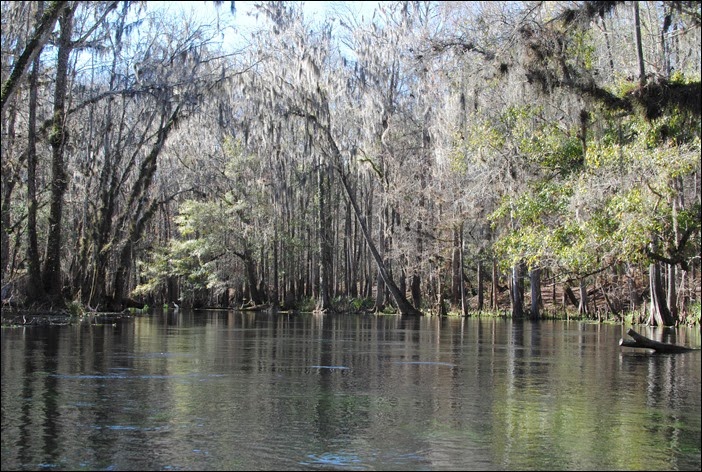 Some sections of the river have a ton of air plants up in the trees. The picture below shows one of these areas. 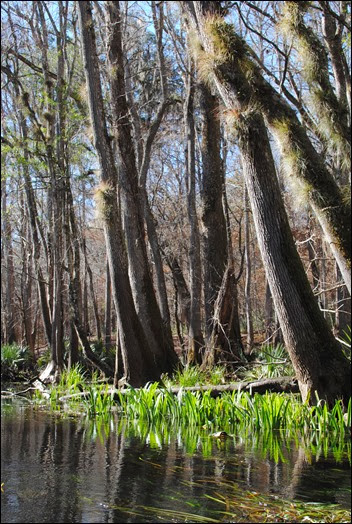 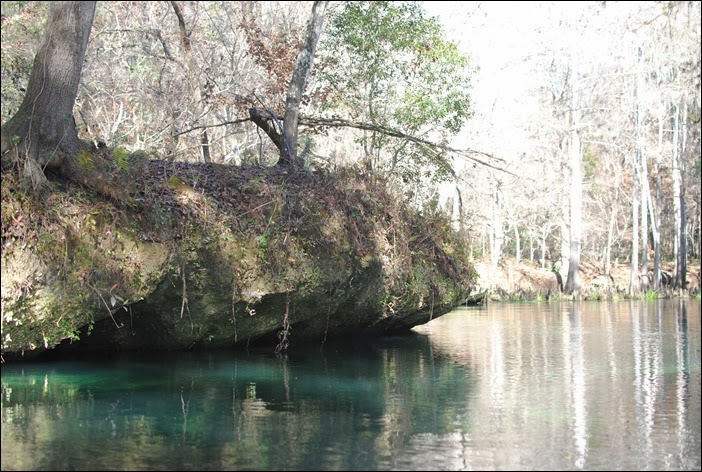 Today’s time on the river was mostly quiet and peaceful, but with the day before being rainy, today had a lot more people on the water. Going upriver we would quickly pass a few groups here and there. But on the way back down we encountered several groups that were very boisterous with lots of yelling and hollering. I guess it’s good that they were having a good time on the water and it’s hard to really get mad at them, but we like the quietness of the river. Sound really travels on the water and we’d hear these groups for a long time before and after we passed them. Not much we could do about it and we enjoyed our time anyway.

This is the docking area at the south end of the river. It’s totally roped off with buoys, so no way you could go by and miss the take out location. 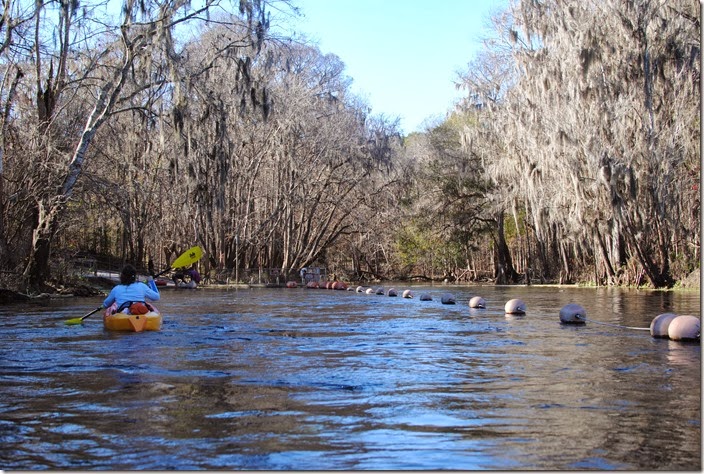 Here is the GPS route showing the north to south track we took as we floated/paddled back down river.

A day kayaking on the Ichetucknee river at EveryTrail

Posted by Julie and Tom at 5:42 PM No comments:

Julie and my plan was to camp more this fall, winter and spring. Try to get as much camping in as possible before the hot Florida weather arrives again. Well, our last camping trip was back in October in Cedar Key. How can time fly by so fast and why are we too busy to get out and camp?

Anyway, we finally did make reservations (necessary in Florida State parks in the winter season) at Tomoka State park near Ormond Beach. We got there late afternoon on Friday, the weather was “cold” and it had been raining some. It was not the best camping weather, but we were happy to be finally getting out and stay in the camper.

Tomoka campground is one large camping loop with about 90 – 100 sites. Most of the sites have adequate vegetation surrounding them with makes for mostly private sites. But I wouldn’t call this campground big rig friendly. Although there were some larger RV’s staying here, most of the campers were in tents or small to mid-size trailers. The campground road has some rather large oak trees very close to the road. When backing into my site (#4) there was a tree making it difficult for me to swing the front end of the truck around. It took me a few tries to finally get into the site without hitting anything.

Tomoka State park is surrounded by water and it really a place made for people who like to fish or have a boat to get out on the water. We didn’t bring our kayaks on this trip, but would have been nice if we had. 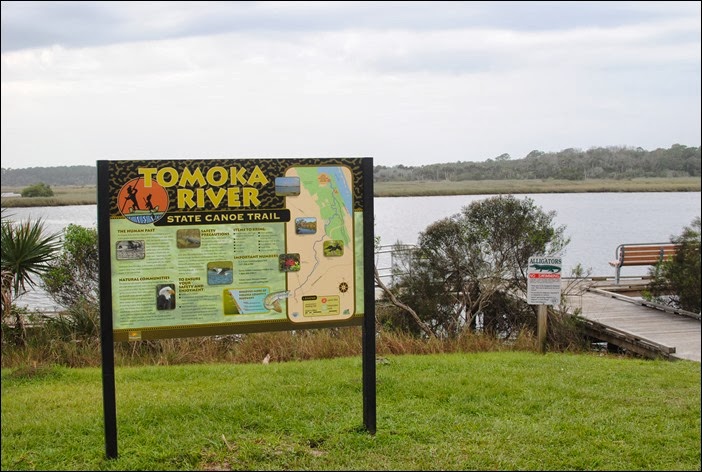 They have a nice boat dock in the park for launching boats, canoes and kayaks. 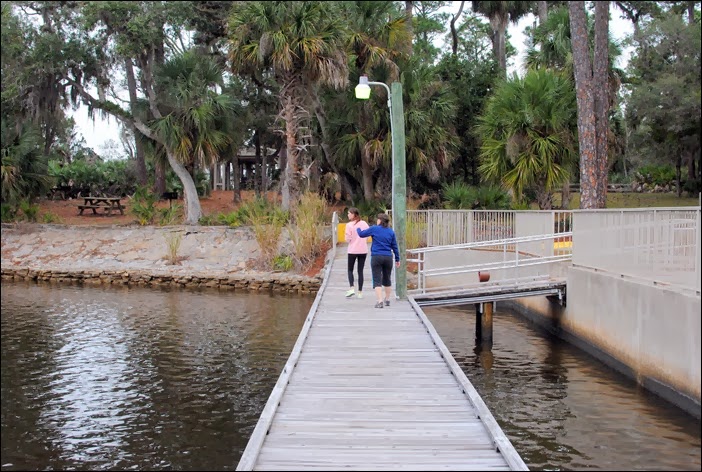 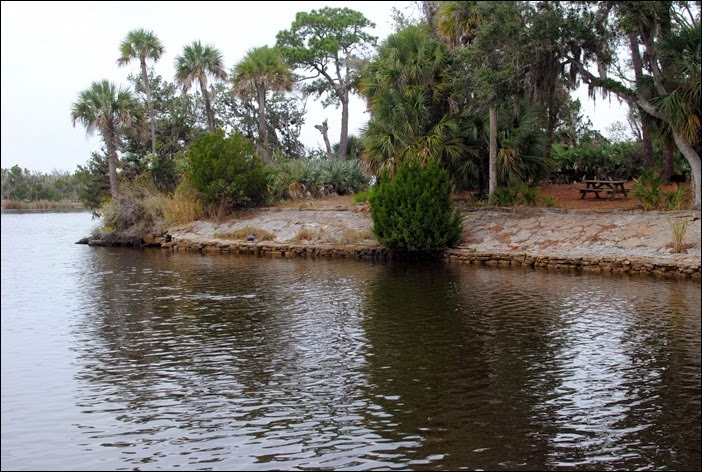 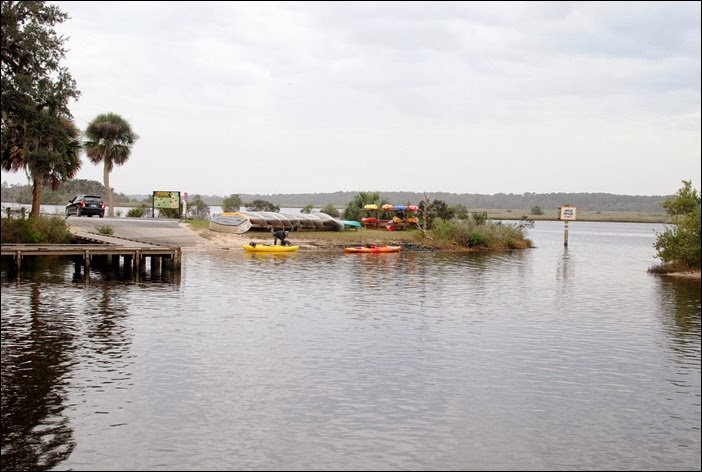 Tomoka campground is a short drive from the Ormond beach and the Atlantic ocean. On Saturday we took a driver over that way, but the weather didn’t cooperate. The wind was blowing hard and the temps were still cool. We tried to get out of the car a few times to check out the beach, but the wind made us do a quick retreat!!

Here’s a picture of the large status of Chief Tomoka which resides within the state park. 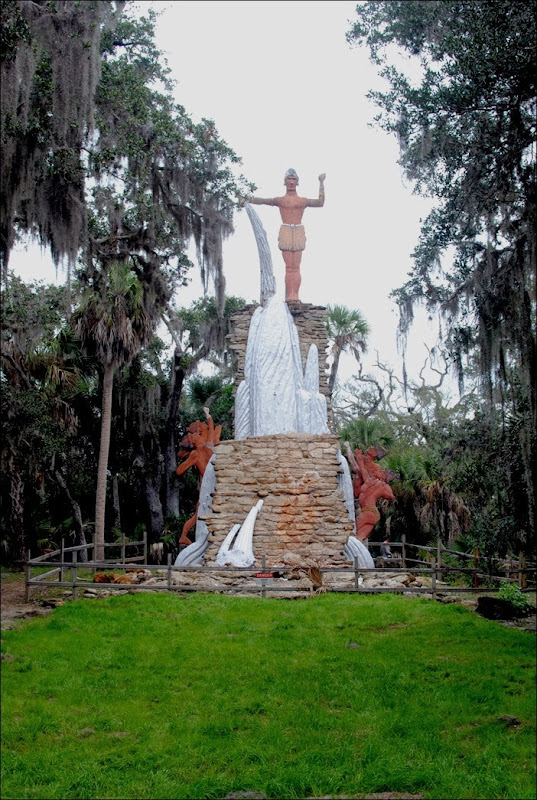 Posted by Julie and Tom at 7:03 PM No comments:

A quick trip to Snowshoe WV for a little winter fun


Date: 12/28/2013 – 1/2/2014
Location: Snowshoe, WV
My younger daughter was on winter break from college and wanted to take a trip to see some snow. I decided to take some time off from work and do a father / daughter trip with her. She’s a senior in college and about to start her last semester before graduating. So, who knows how many more chances we’ll have to do spur of the moment things like this.
About 10 years ago we had made a family trip to Snowshoe, WV and stayed for a short time and did some skiing. We enjoyed this trip and have some fond memories of that adventure, so we decided to give Snowshoe resort another try. I made reservations at the Silver Creek Lodge at Snowshoe for three nights. This would give us time to do some snow activities as well as do a little skiing. Being from Florida we don’t hit the slopes very often, so a day of skiing is enough for us.
Driving up and getting close to West Virginia we were a little worried as there was no snow on the ground. They had just had a few warm days of weather and a day of heavy rain. But as we got to the base of the mountain we found the temps were dropping and the snow guns were out in full force. Snowshoe’s resort is at the top of the mountain, so as we drove up the mountain things changed to a winter wonderland. There was snow (man made and real) everywhere and all the trees were coated in a thick coating of snow. It’s exactly what we were hoping to see when we thought  up this trip.
It was cold and the wind was blowing at the top of the mountain, but it was the winter wonderland that we had hoped to see. 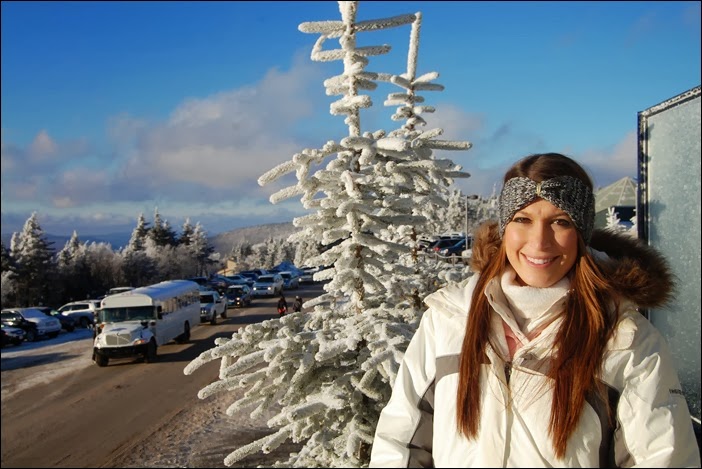 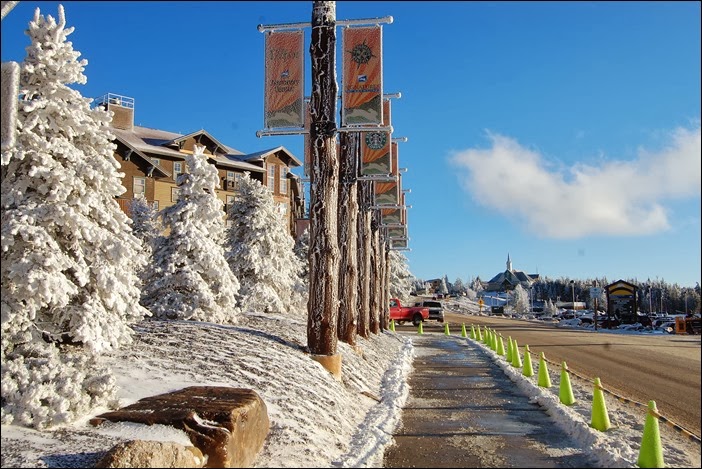 The first full day that we were at Snowshoe we had planned to do a few of the “adventures” they offer for their guests. The first of which was the RZR off-road adventure. This was a blast as it was freezing, the snow was blowing and they took us on some very cool back roads that wound around and up the mountain.
I made my daughter drive the first part of this tour. I didn’t know how she would do since she’s never done anything like this, but she did great and had a lot of fun barreling down the back roads through the snow. 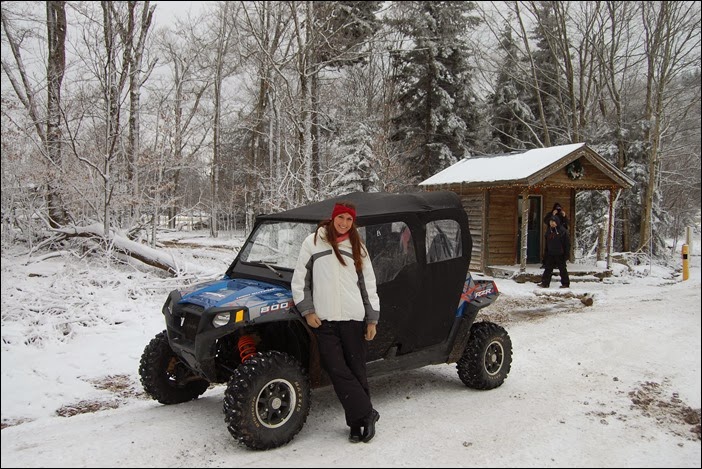 They did a few photo stops along the way, but with the snow and wind the views of the mountain were not the best. Here’s one picture of my daughter and me at one of the stops. 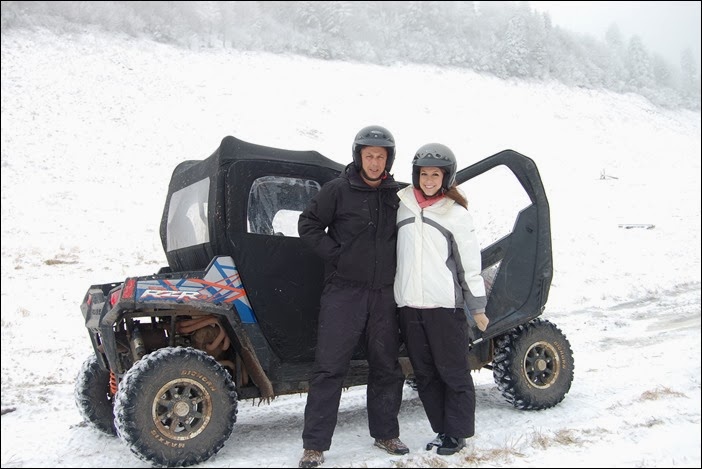 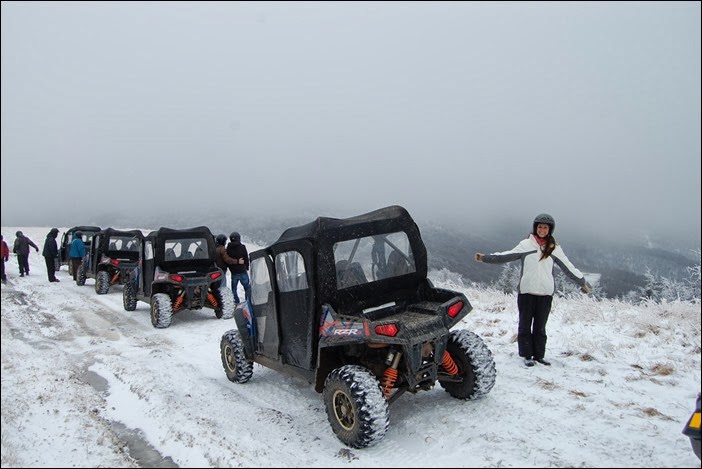 Here’s the GPS track of the off-road adventure that we took.
Snowshoe Mountain WV RZR ATV Trip at EveryTrail

That evening, once the main slopes were closed for the day, we took a snowmobile tour. They take you around many of the slopes that are used for skiing. This was another fun adventure, except for my snowmobile kept stalling every time I let off the gas. They eventually gave me another machine that ran much better. 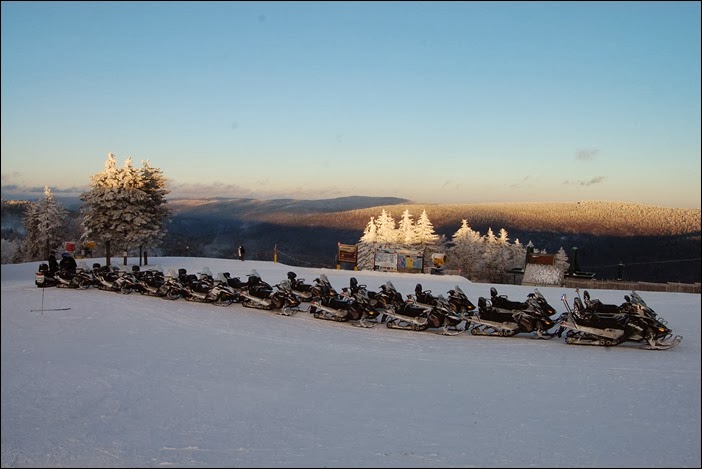 And the track that we took for this tour.
Snowshoe Mountain WV Snowmobile Trip at EveryTrail


We went out and celebrated New Years at the main downtown/square area of Snowshoe. They has some music and other activities going on. We did make it till mid-night (amazing for me!) and didn’t get to bed until way past what I had planned on. But we had a lot of fun, so that made it worth it. On New Years day we were schedule to do some snow skiing for the day. We didn’t get as early a start as I had hoped, but still had a full day of skiing. For a couple of Floridians we did pretty good and nobody got injured!!! Always a good thing. 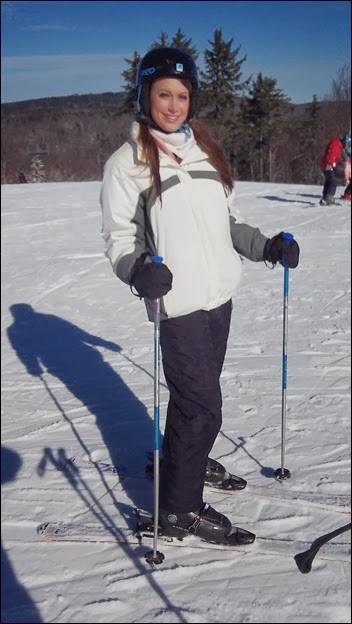 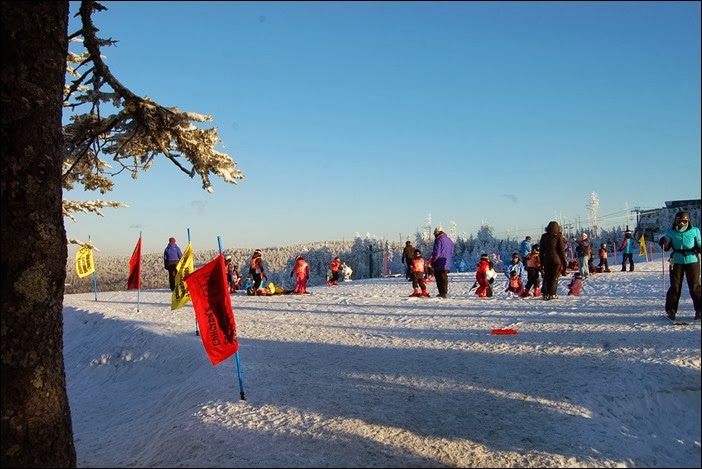 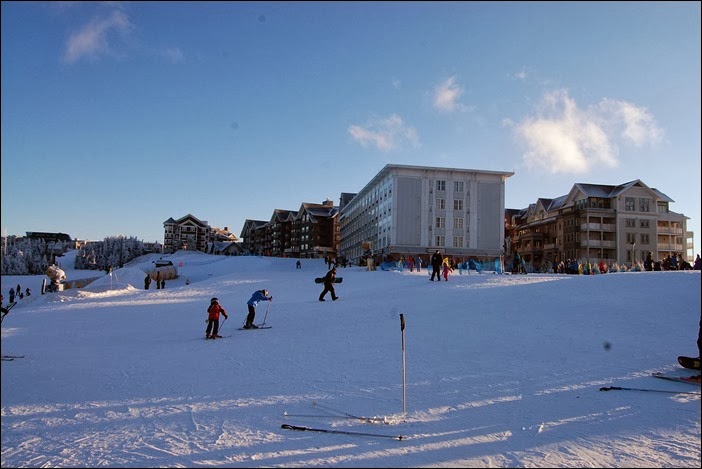