After our one night stay at the Fox Island Wilderness Lodge, we were scheduled for the 9 hours boat tour of the Kenai Fjords National Park. This tour would take us on a 150 mile round trip journey to the Northwestern Glacier which is fed by the Harding Ice field.

The boat tour out of Seward arrived right on time to pick us up after we had our breakfast at the Fox Island lodge. They really treated us well as we never had to deal with our luggage during our entire stay. Also, most of the staff came down to the dock to see us off and take some pics of us as we were leaving. Also a very nice and personal touch. Below is a picture of the boat from Kenai Fjords Tours that we would travel on for today’s adventure. 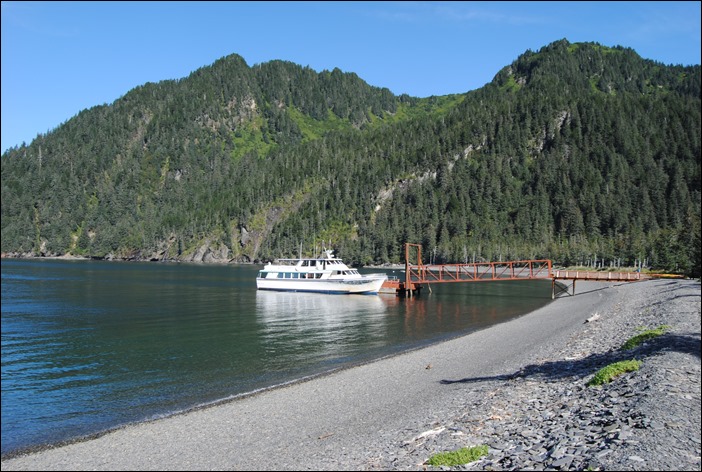 The Kenai Fjords National Park is beautiful with its’ towering mountains and glaciers flowing from the icefield. 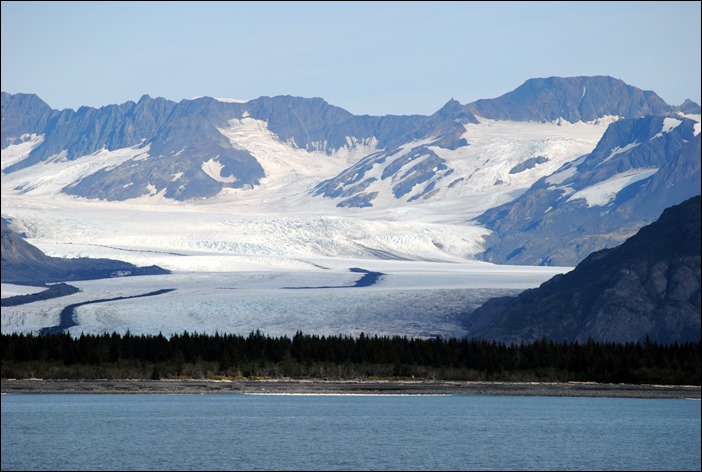 One of our first stops was just a short time after we boarded the boat. This area had a lot of neat spires and the boat captain did a great job of getting us close which made for some good pictures. 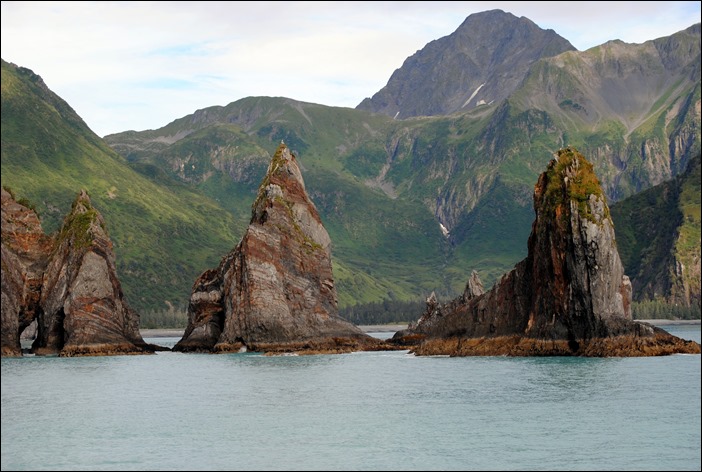 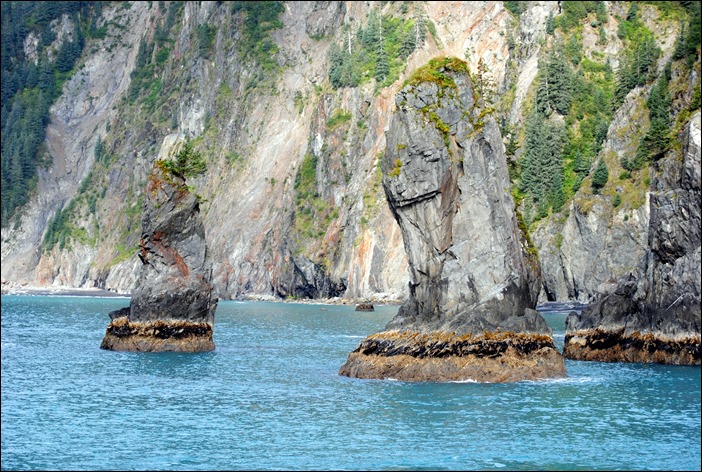 We had a little excitement after we left this area. A fishing boat had hit some rocks and was sinking. So, another tour boat was at the scene helping to get the people from the fishing boat before it totally sank. The Coast Guard helicopter was hovering above these two boats in case their help was needed and the captain of our boat had to stand by as well. The next day we spoke to some people who were on the tour boat that helped out and they were able to get the fishing crew safely off the sinking boat. The fishing crew had to spend the entire 5+ hours on the tour boat since their tour had just begun and they were not about to take them back to Seward until done.

You can see the boat that sank to the left and the tour boat who rescued them to the right. 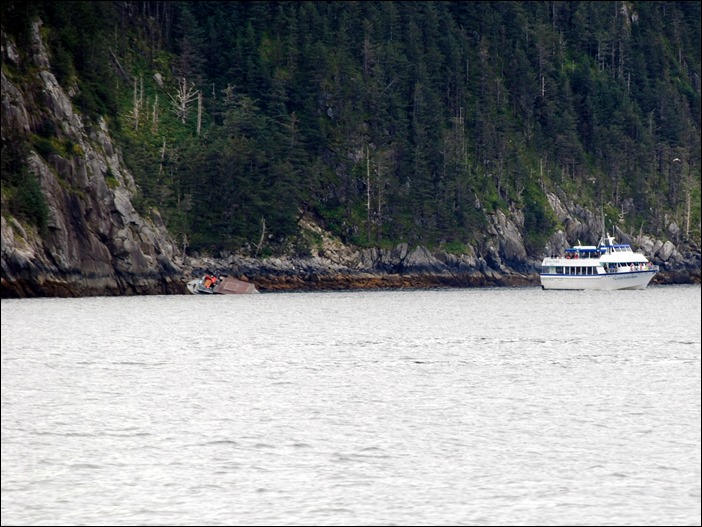 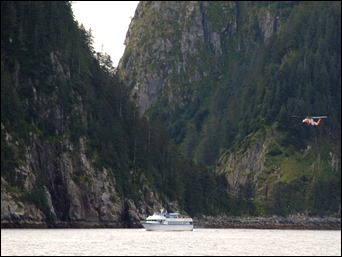 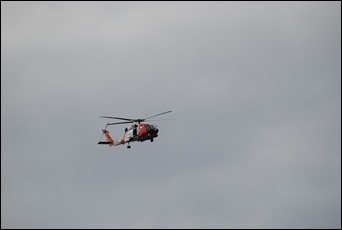 So, after that little excitement we were back to our tour of the Kenai Fjords. 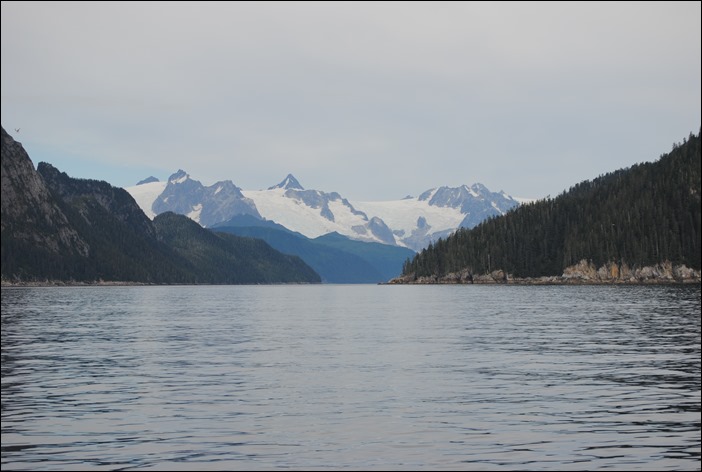 These next two pictures show the first whale that we had come across. Although these pictures are not great, it does show the humpback whale as it was surfacing. I wish I was able to get a better picture, but the whale just would not cooperate!! 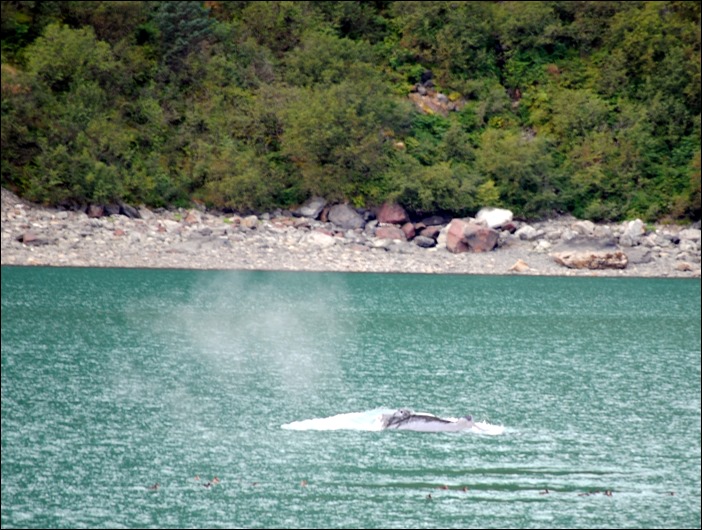 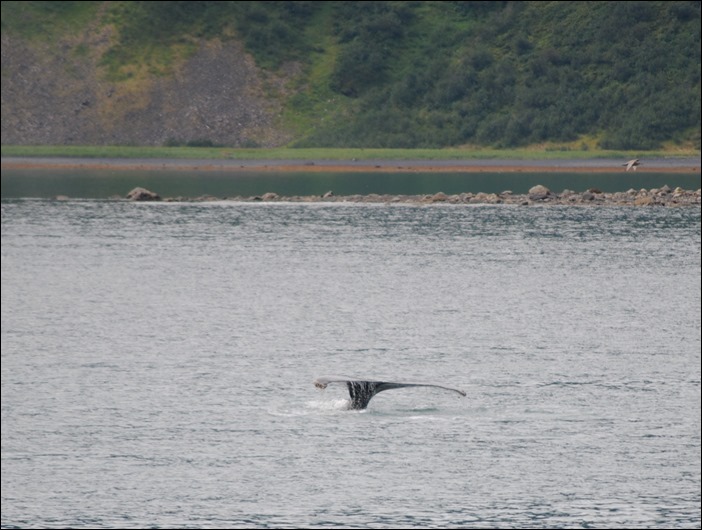 We next made our way up the Northwestern Fjord and up close to the Northwestern Glacier. This boat was heading in the opposite direction, but give you a pretty good perspective of how massive these mountains and surrounding icefields really are. 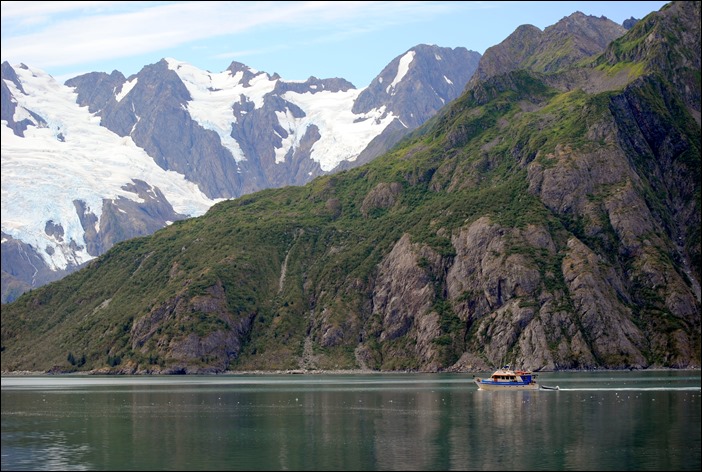 The halfway point of our trip was when the captain stopped the boat about a quarter mile from where the Northwestern glacier was entering the bay. We sat there for about 30 – 45 minutes watching the glacier calf which for me was one of the best parts of the trip. It’s really hard to tell from these pictures, but the glacier towered about 1000+ feet above the water and when the ice would break off, it would sound like thunder. Then it would cascade down and eventually land in the bay. What was pretty amazing was how quiet the boat was during the entire time were were in this location. There was probably 100+ people on the tour, but everyone was quiet the entire time as we waited for another crack and falling ice. It was pretty cool!! 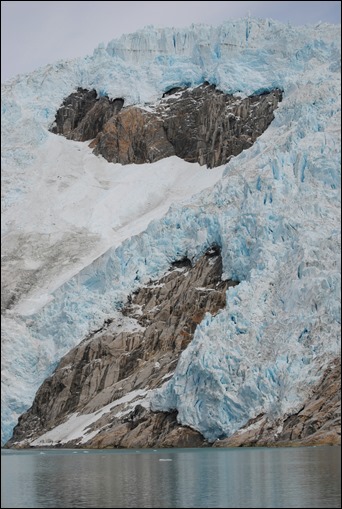 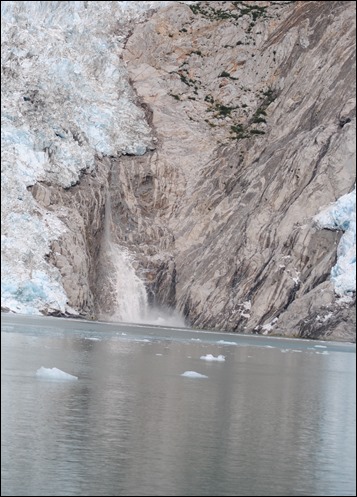 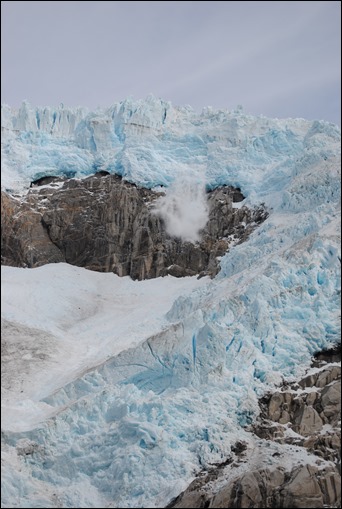 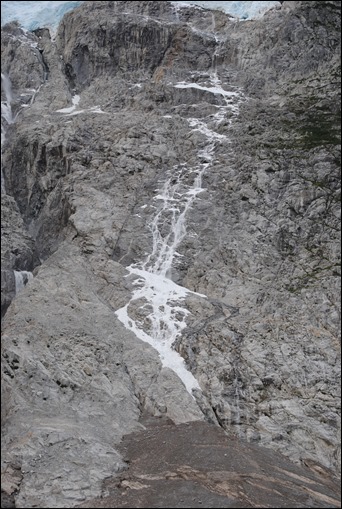 This harbor seal was playing in the ice as we were parked in front of the glacier. He obviously had no fear of our boat and was having a fun swimming around the icebergs. 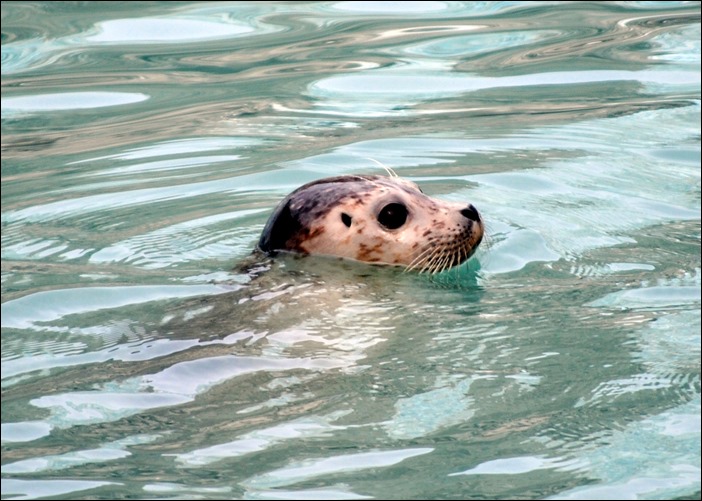 As we exited the Northwest Fjords, we came across a colony of harbor seals floating on all the glacier ice that had accumulated. Our tour guide (the captain) said they crawl up on this ice to get warm and try to keep as little surface area of their body touching the ice as they can. This is actually much warmer as compared to swimming in the frigid water. 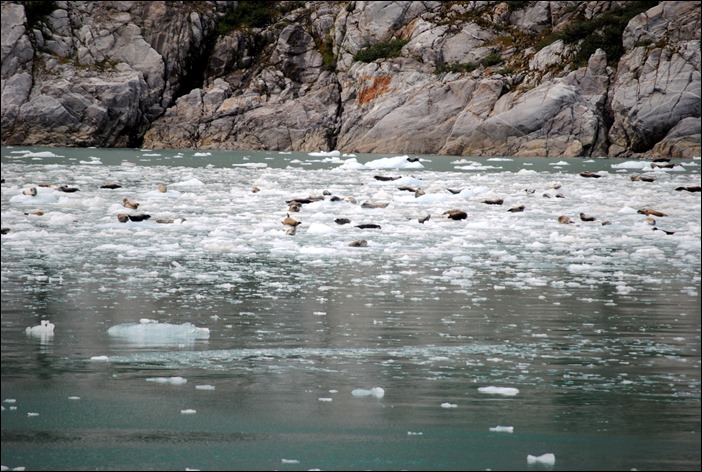 Although not the best  picture, this is a Dall Porpoise which was riding the wake of our boat. This one was part of a larger group who was following (and leading) us for awhile. It was amazing how fast they could swim, which made getting a good picture of them very challenging. 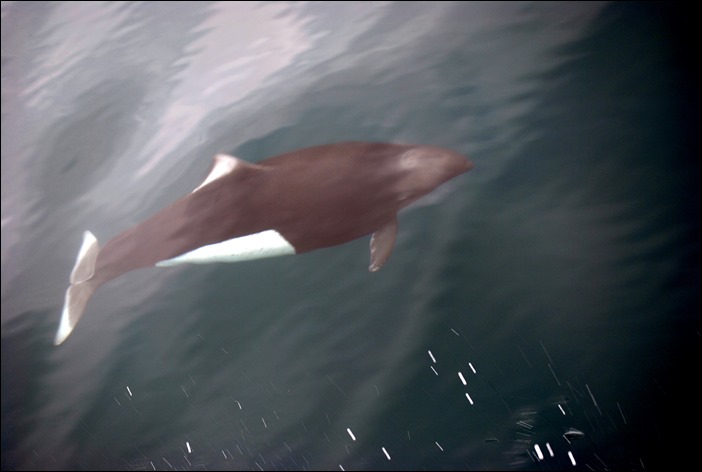 We also visited some islands were the puffins (horned and tufted) were nesting. Some of them nest in the cracks of the rocks and some nest high on the island in the thick vegetation. 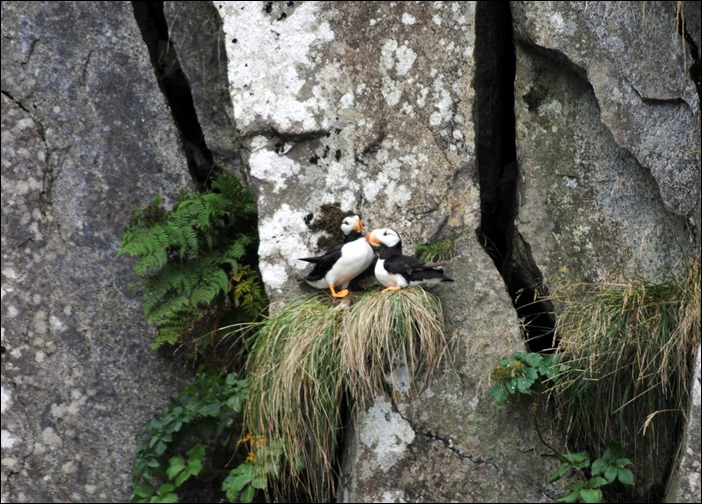 This island had a large nesting area of gulls and there were thousands of them covering the rock walls. Some on the boat felt this was a little like Alfred Hitchcock’s movie “The Birds” 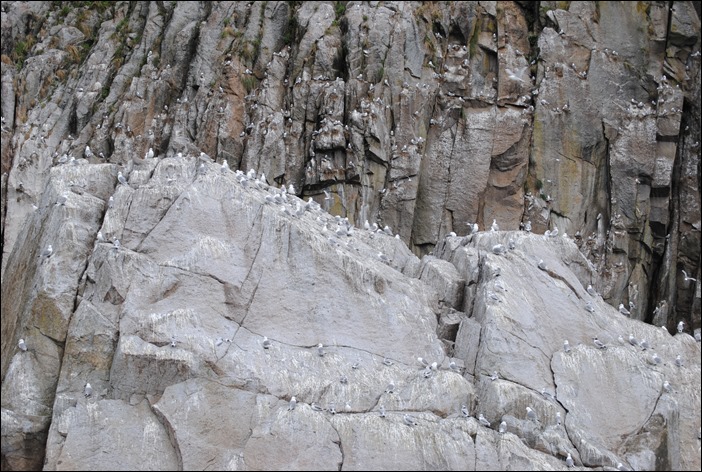 Our boat captain got a call from another tour boat that they had spotted some Orca whales feeding several miles from us. So, we sped over to the bay where they were and got to watch them for about 15 minutes as they cruised around. There was a group of about 4 – 5 whales and they would splinter off for several minutes and then get together as pack once again. These whales were really awesome to watch. 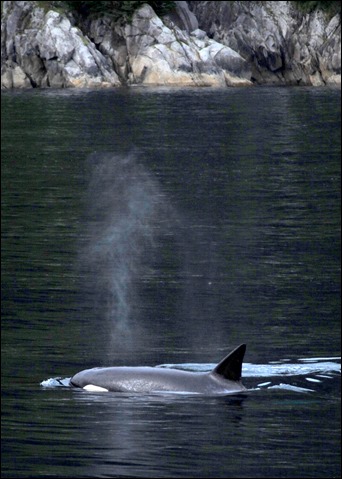 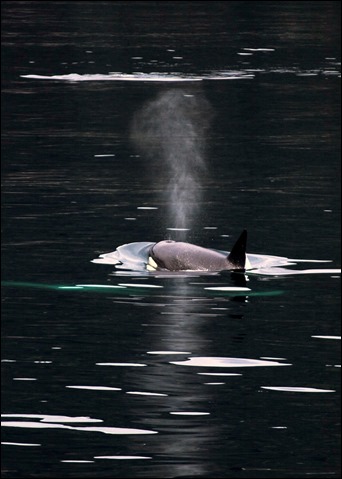 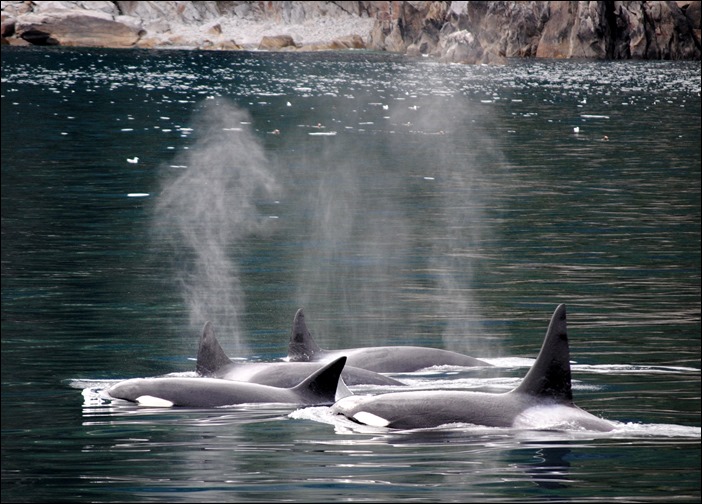 One our way back to Seward we found a colony of sea lions on a rocky island. Many of the males were chest bumping and tussling with some other males. The captain told us that these guys were too young to become the dominant males of the colony, but they were practicing for when that time eventually comes! 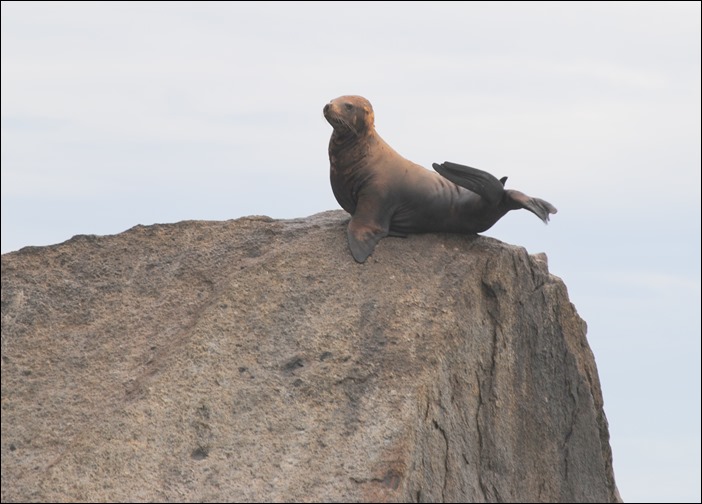 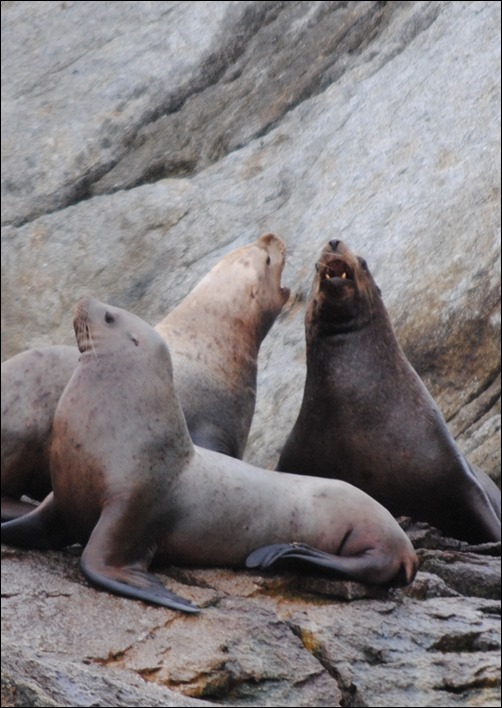 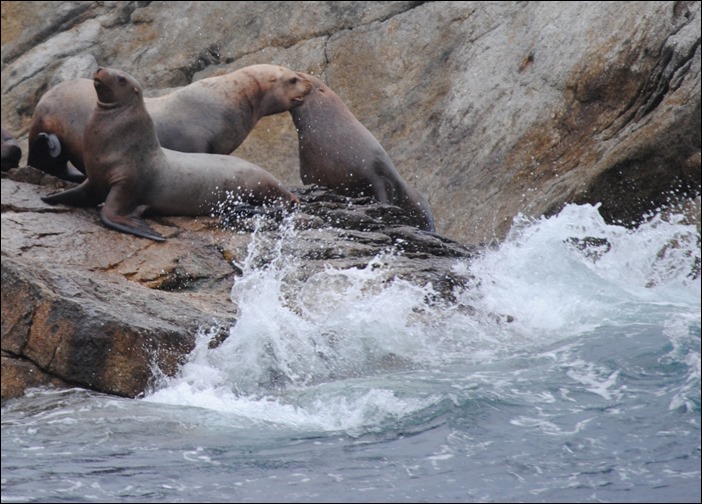 We saw many bald eagles on our trip and this one was on the far side of Fox Island as we made our way back to port. 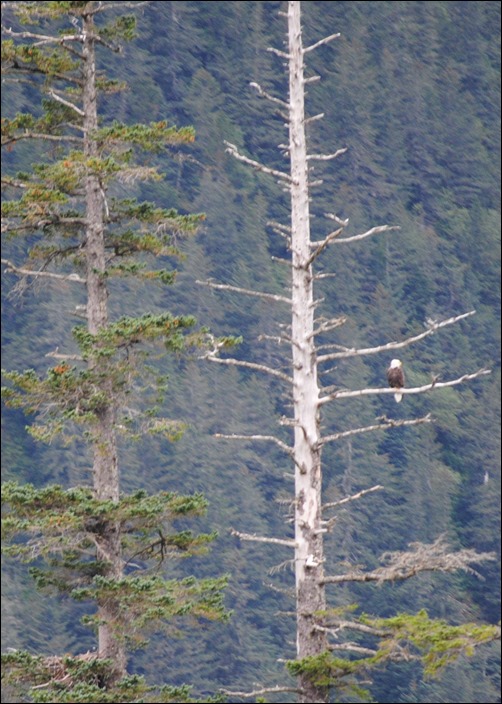 Here is the GPS track our our trip that started at Fox Island and ended at the small boat harbor in Seward.


I took way too many pictures to fit into this blog post. Here’s a link to all the pics I took from the Kenai Fjords tour.