Last Sunday Julie and I did some kayaking on the Florida designated Potano Paddling Trail starting at the northern section at Newnan’s lake in east Gainesville. You can check out that trip here.  Our progress on the Prairie Creek section was stopped at about the mile and a quarter mark by a downed tree that was blocking our way.

So a week later, we decided to start at the southern section from the bridge crossing Camps Canal at County Road 234. We were hoping that we could get all the way up to the section where we had to turn around last weekend.

Here’s the picture of County Road 234, which is a very scenic section of south eastern Alachua County. This is where we put in to paddle Camps Creek (Potano Paddle Trail). There’s parking next to the bridge on both sides of the road. 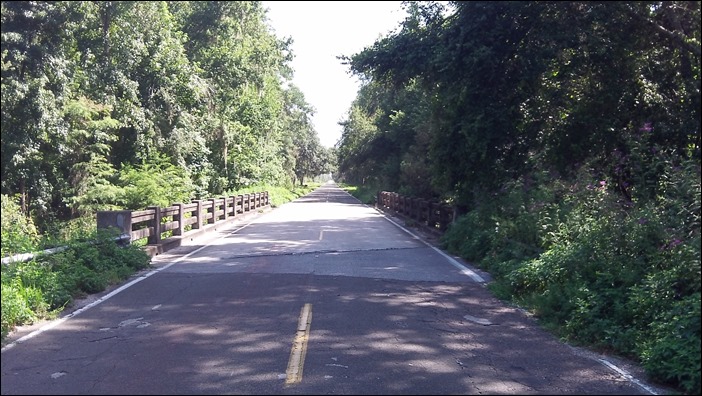 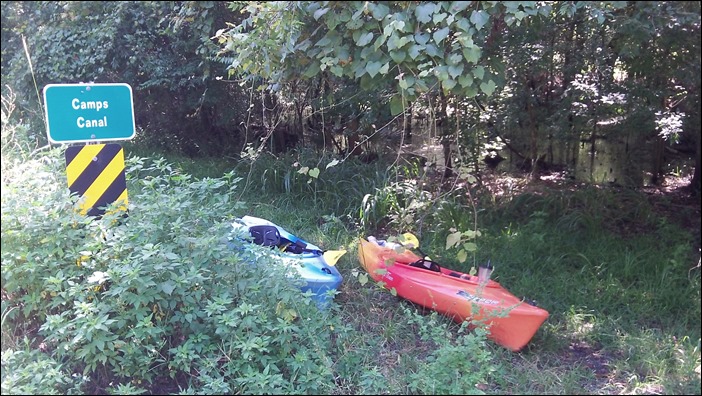 Camps Canal, which includes a section of the Potano Paddle Trail, is a canal built back in the 1940’s by the Camps family which owned a large section of land in this area. Their intent was to drain most of the wetlands in the area, including what is now Paynes Prairie State Preserve. This was a very controversial project back in those days and to some extent continues on today. This canal channels water down to Orange Lake south of Micanopy, which is a lake that has struggled with maintaining water levels over the years. So, they want and will take all the water they can get.  Paynes Prairie at one time was a lake, but has since dried up and is now a vast prairie. The managers of the prairie want the water to be diverted there to maintain the wetlands that have existed there prior to the canal being built. So, the two sides struggle over control of the water that we were kayaking on today. 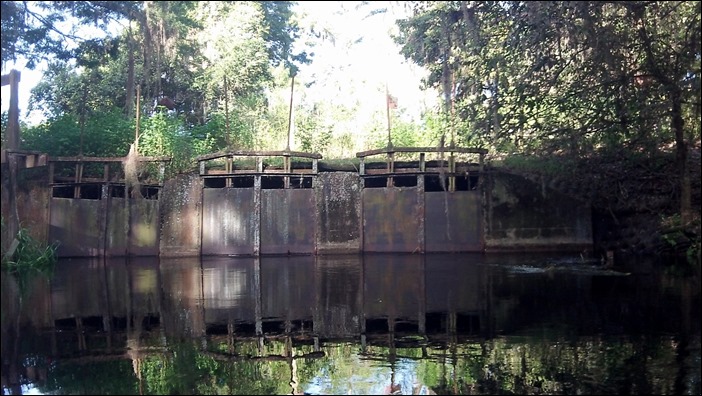 Julie and I paddled upstream, with the first mile being in the canal. Since its' been around for so long, it was tree lined with many pine and cypress trees growing on the banks. So, it was a nice paddle, even though it was evident that it was a manmade water way. 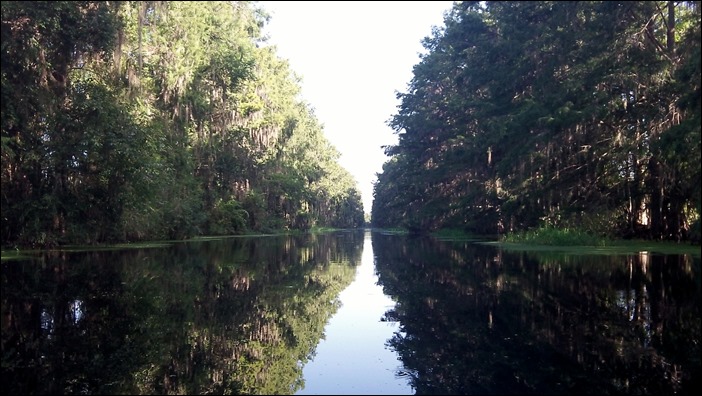 Like I mentioned above, our hope was to get all the way to the downed tree that stopped us the week before, but that was not to be. At around the mile 1.3 mile mark we ended up in a cypress swamp which made for some tough paddling. We tried to follow where we thought the water was flowing from but we eventually came to a dead end. Plus the mosquitoes were starting to get a little out of control. So we decided to turned around. We were thwarted once again in our attempt to fully paddle this section of the Potano Kayaking trail.   When I Goggle Earth’d this area later, it looked like we should have gone more north-east through the swamp. but instead we went a little north-west. Unfortunately there were no trail markers that we could see. Maybe we’ll try it again and be more successful next time.

A little hard to see, but Julie’s back there working her way around all the cypress knees in the swamp. We had turned around just upstream of here. 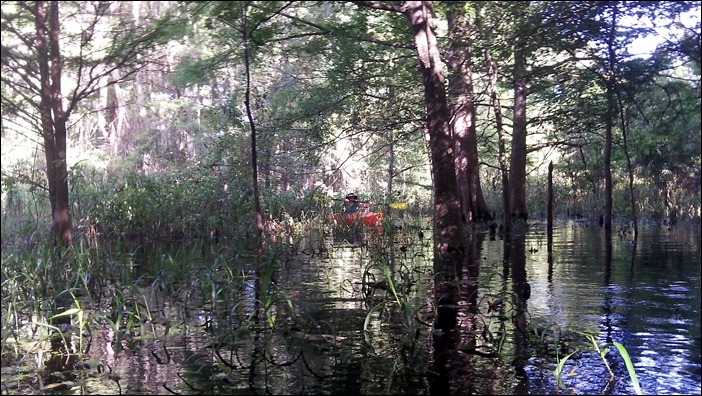 The area north of the Paynes Prairie water diversion locks was very natural and was an interesting area to paddle. We were in a very wooded section which was far away from any developed areas. We never saw anyone else on the water. Maybe that says something about the areas we tend to paddle! 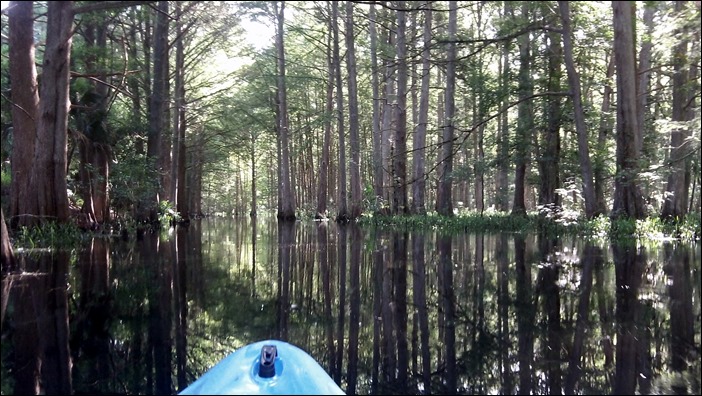 Heading back down stream we passed the bridge where we put in and continued on for another three-quarters of a mile. This section of the Camp Canal was actually much nicer and more natural than the previous section to the north.  We eventually came upon a downed tree that was blocking our way. It probably would have been fairly easy to get by, but we had paddled enough for one day, so we turned around and headed back to where we put in.

Here is the GPS track of our trip today. It was about a 4.6 miles in length which is not to bad for the summer time in Florida.