A trip to Maine and a Whitney Family Reunion

I was born and raised in Massachusetts and still have family up in the northeast part of the country. Myself and one of my brothers live in Florida and two other brothers and their families still live up north.  Luckily for Julie and myself, my Florida brother and one of my northern brothers, along with their wives, bought a cabin on a lake in southern Maine. So, this makes a great place for all the families to get together and spend some time hanging out. This cabin is on Long Pond near East Parsonsfield, Maine. I don’t know the difference between a pond and a lake, but it’s a very nice body of water. A beautiful location to spend some time!

This year, over the fourth of July holiday, we were able to get all four Whitney brothers and their families together for a reunion at the Maine cabin. I think we counted up about 26 family members and all staying at the same family cabin. Sure glad my brother added a second bathroom this past year!!

Early on in the week, before the big crowd showed up, many of us went to dinner one night in Krista’s Restaurant in downtime Cornish, Maine. It was an amazingly good dinner and we all enjoyed our time together. It’s hard to imagine having such a good meal at a place that’s kind of in the boondocks, but if you are ever in this area, it comes highly recommended!!

The first few days that we spent in Maine was kind of cool and rainy, but even with the not so perfect weather the views of the lake were sure nice. 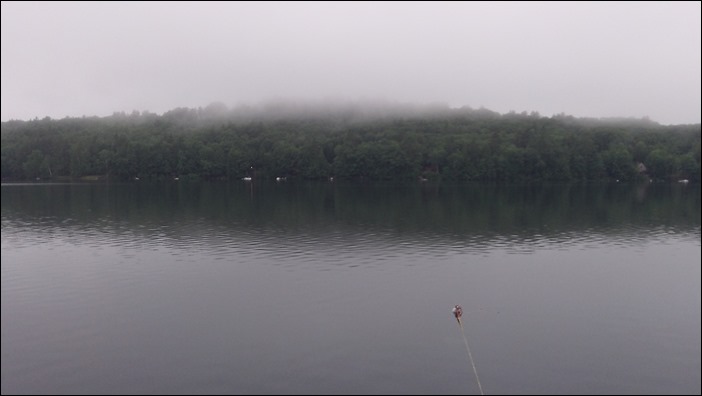 Another outing we did was to visit the Allagash Brewing Company in Portland Maine. We’ve done many brewery tours in our travels, but this one was one of the best that we’ve seen. A very interesting and informative tour done by an entertaining tour guide. This is just another recommended thing to do if in this area.

Not sure what Julie is doing here, but the rest of us were enjoying our samples at the conclusion of the brewery tour. 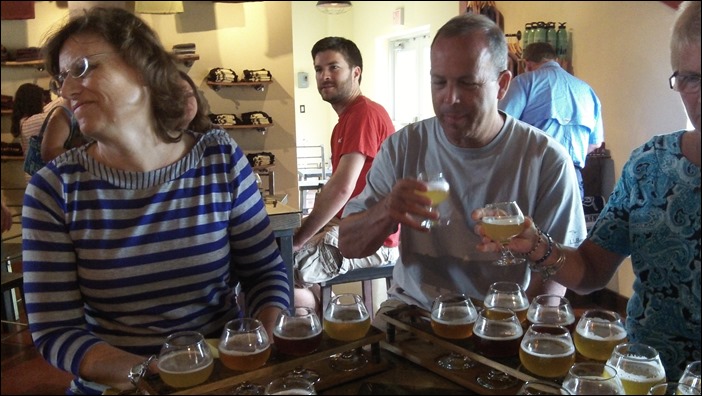 Finally all the rest of the family joined us at the cabin and the party was on!  We had four generations of Whitney’s present. Here’s my dad with his great grandson Jet. 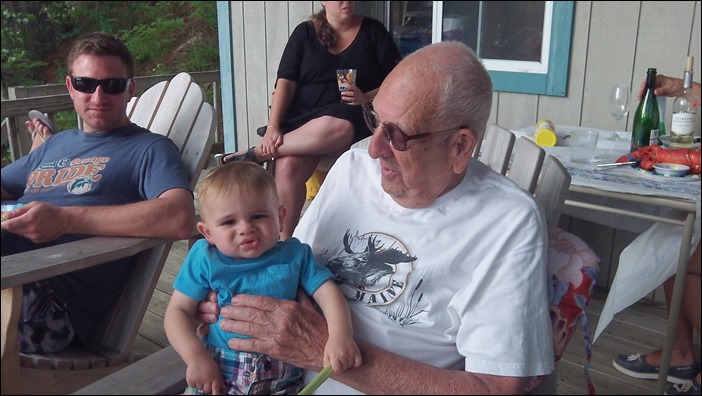 Here’s a picture of the Maine cabin. It’s a large place with plenty of room for these large gatherings. 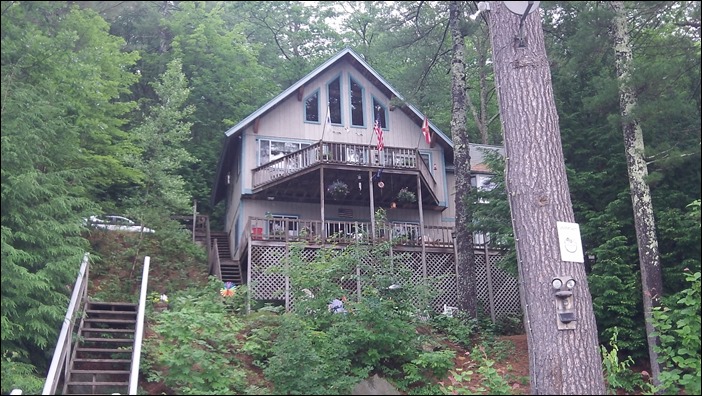 Here is a picture looking across the lake on a clear morning. 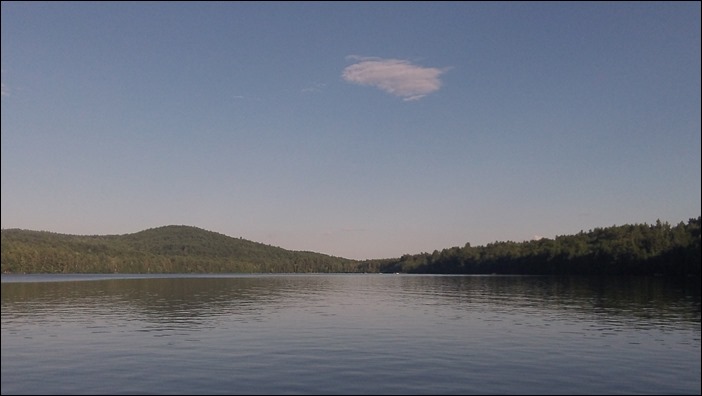 Here’s what we spent a lot of our time doing, floating and swimming in the lake. This picture is of all the “Cousins” having a good time. It’s sure is fun watching them all get together and enjoying each others company. 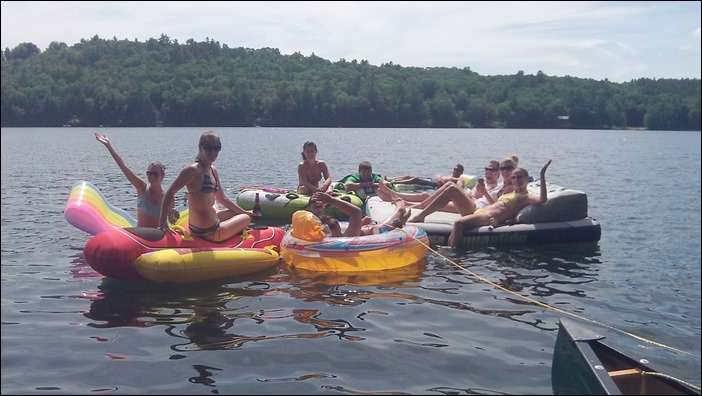 For some reason my younger daughter (Allison) loves to fish. The first night she spent hours on the dock casting, but never had a bite. But finally we found a good spot to fish and she caught a nice sized bass. We don’t keep any of the fish and they all get returned to the lake. 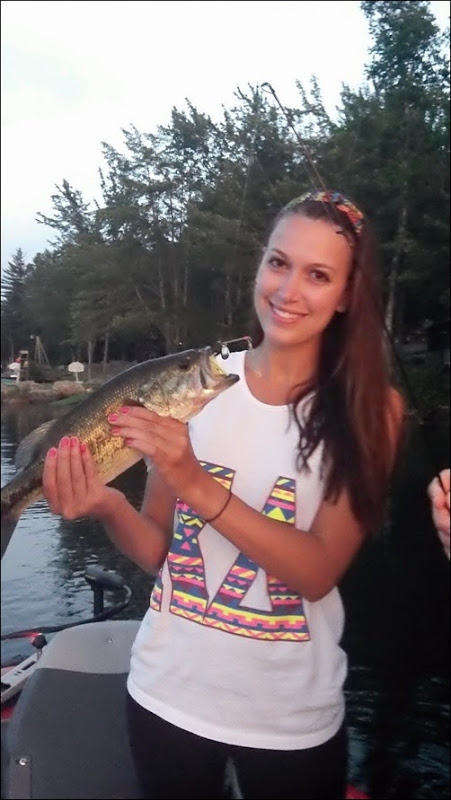 My nephew Matt with his catch of the day, 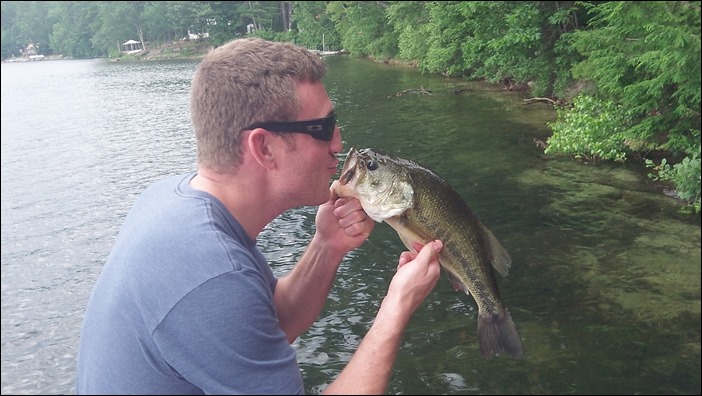 With so many people staying at the cabin, we had to open a tent city to catch the over flow. Julie and I stayed in the far tent and slept awesome in the great outdoors. But one thing we found is that it sure does get light early in Maine in July. I think the sky started getting light at about 4:30am. So, no sleeping in for us! 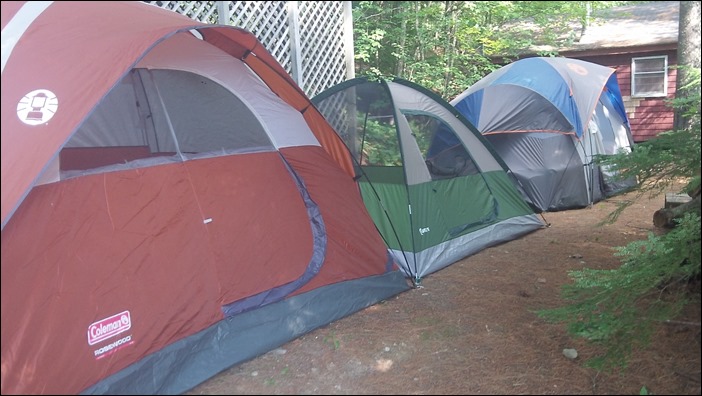 We had a few puppies hanging with us. I think we tired him out! 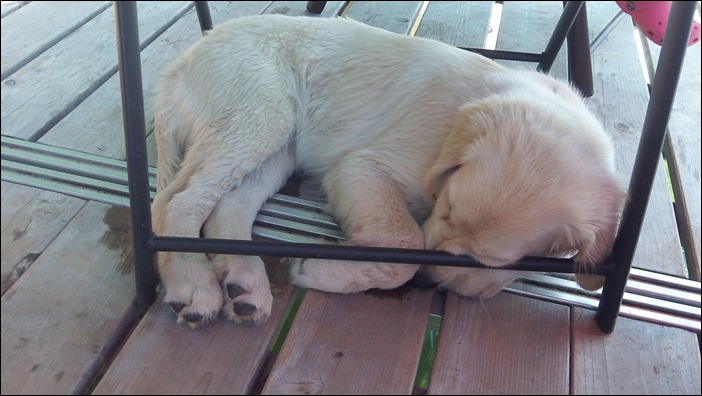 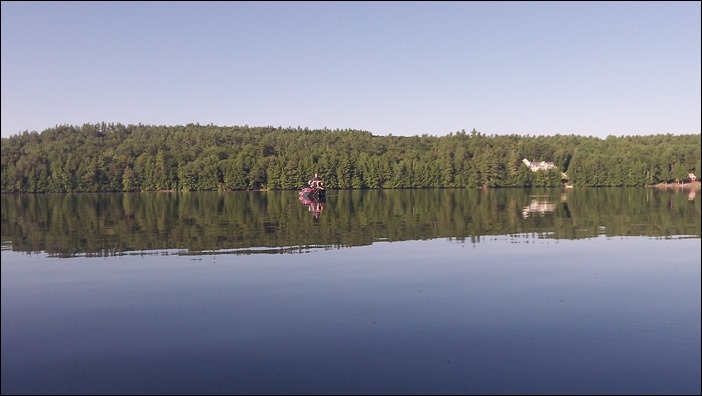 Julie and I did some easy kayak trips. About a half mile down the shore is a loons nest. They sure do have an interesting call and would hear them many mornings as they headed to other parts of the lake, 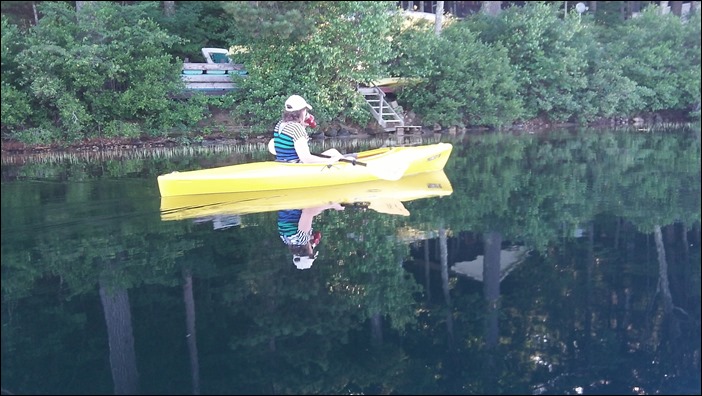 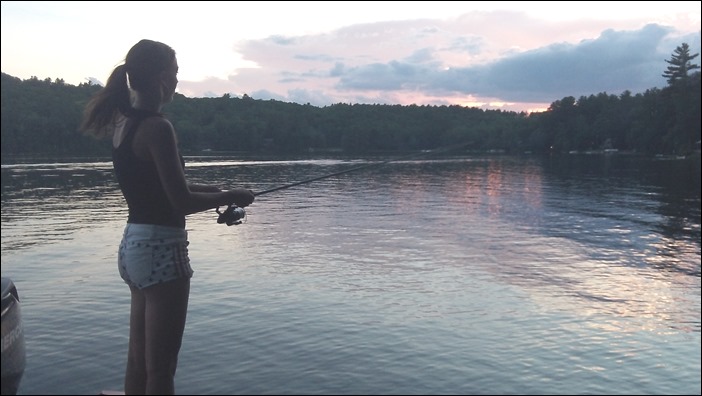 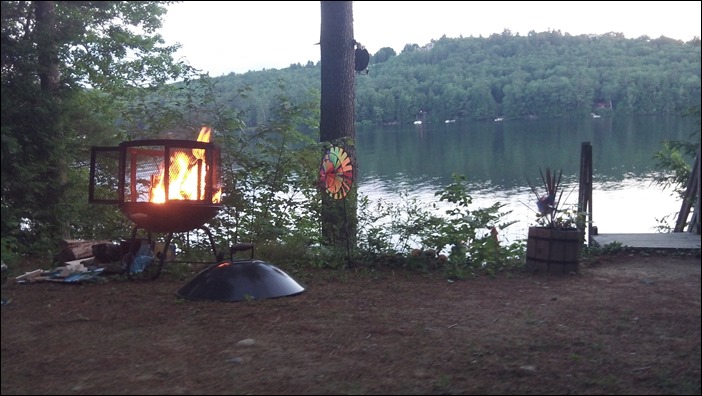 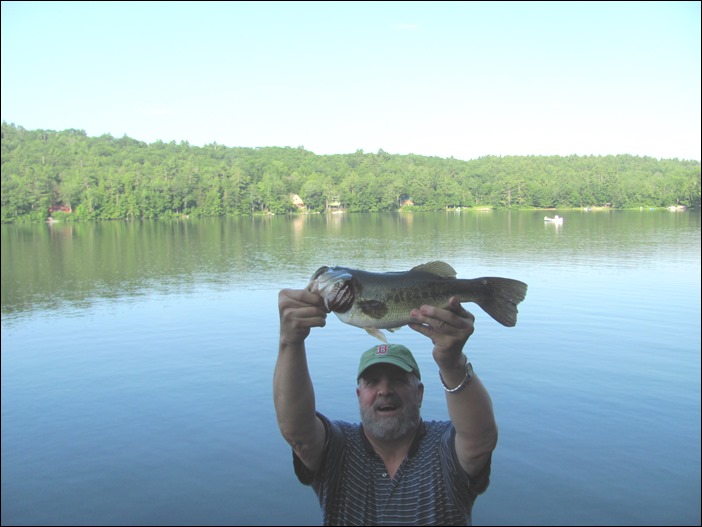 Here’s my brothers dog Brady. He loves to stand on a rock under the dock. He just hangs out there and watches the water for fish to swim by. 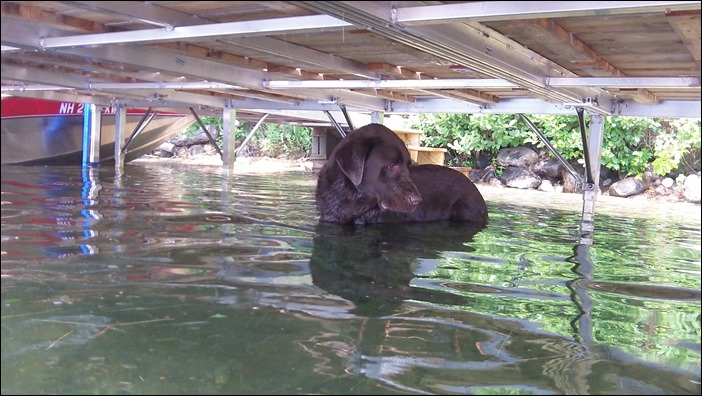 The last day before we all had to head home we decided to have the first annual “Curtis Cup” corn hole tournament. My dad (Curtis) donated some money to be given to the winner. This lasted all afternoon and into the evening. It was a lot of fun and will probably be repeated during our next family gathering.

This last evening at the lake turned into kind of a wild time and will probably go down in Whitney family history. I think it was one too many round of Thunderstruck, a college drinking game, which  probably should not be played by anyone over the age of 25. But we did and we survived. There won’t be any pictures of what happened on this blog, but I hear there’s a few Facebook videos floating around out there. Just glad we all survived and didn’t have any complaints for the lake neighbors. 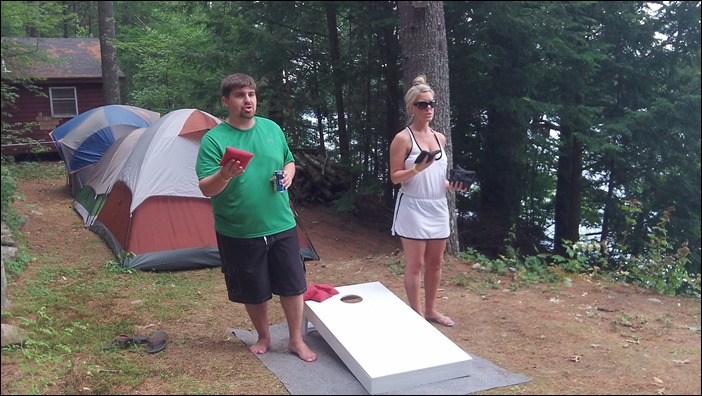 One last nice sunset over the lake. 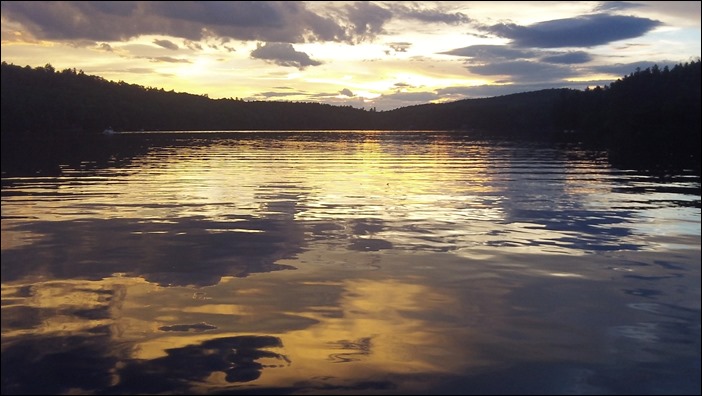 Here’s a Youtube Video montage of pictures taken throughout the week, The music to this video is by a Portland band called Tricky Bitches. We saw them play a small concert while we were in Maine and they are now one of Julie’s favorite bands. You can see some of there videos on our Youtube home page.

Email ThisBlogThis!Share to TwitterShare to FacebookShare to Pinterest
Labels: Maine